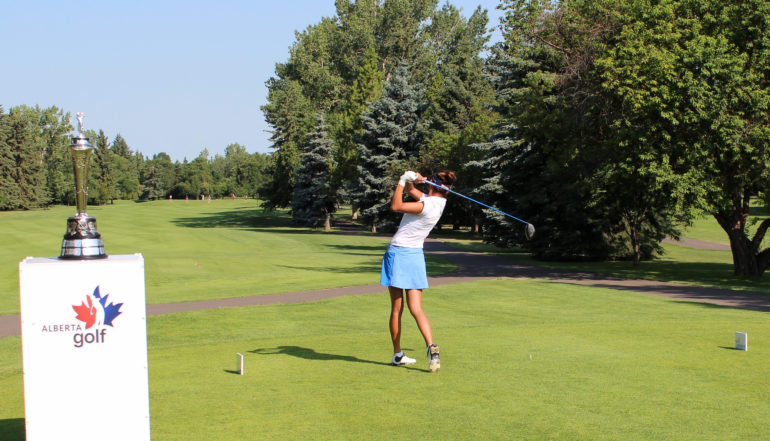 A golf course with over half a century of history will provide a test for the best amateur female golfers in the province in 2018 as host of the Sun Life Financial Alberta Ladies Amateur.

Many of those players were decades away from being born when Willow Park Golf and Country Club saw it’s first tee shot hit back in 1965.

The south-east Calgary club has plenty of mature trees lining fairways which might describe as being tight.

“People looking at the golf course, even for the first time are intimidated by the narrow fairways or what seem like narrow fairways,” said Head Professional at Willow Park, Cathy Burton. “It’s an old, traditional golf course with lots of trees, a few bunkers and water hazards. People that play here all the time say, what trees?”

If you can avoid the trees, Burton says you will face more challenges once you arrive at any of the greens.

“We’ve had tour players that play in the Shaw Charity Classic saying you guys have phenomenal greens. Comments like that go a long way and anybody that plays here comments on how fantastic the greens are, how true they are. It doesn’t mean they aren’t tricky, they’re just so well maintained,” said Burton.

The tip of the hat for the pristine putting surfaces goes to superintendent Brian Denomme who has done plenty to make those greens roll around 12 on the stimpmeter on average and Burton says if need be they can roll faster.

The swales around the greens make an errant shot tougher with some tricky wedge play, so Burton says making sure you have the right yardage will be important.

Some of the par threes are narrow and deep (hole#18 is about 55 paces front to back) which will test the talented field for sure.

“Really the defense would be the greens and the rough around the greens because if you’re missing it at all it’s not necessarily an easy up and down.”

While it’s not a wide-open golf course those large trees will provide some protection against the wind which seems to be a somewhat regular occurrence in Calgary. Players will have to take note of those tree tops to determine direction but can become victims of a swirling wind through those same branches.

Burton says Willow Park can play anywhere from 5,700 to 6,100 yards which offers up some options when setting up the course.

Some of the junior members at Willow Park will be available to caddie during the event and Burton says it’s a great way for these young players to see how the next level plays a golf course.

“I used to caddy myself and I learned a lot of trouble shots,” she said. “Sometimes that doesn’t hurt your game to see what somebody else does.”

One young player who calls Willow Park her home course is 19-year-old Kenna Hughes, currently playing at the University of Alabama-Birmingham. Burton says she’s likely going to play and might have a slight edge on the field due to the course knowledge she’s gained over the years. Having said that, it could also work in reverse, said Burton.

“Home course is an advantage and it’s not an advantage when you’re the home course kid, there’s probably more pressure on you than anybody else. It becomes more of a mental game than a physical, technical game.”

Players are advised to take note of holes 11 through to 17 as they are more challenging than the rest of the course, depending on how the course is set up. Hole #14 is one of note though.

“It’s a dog-leg right par five, with water basically all the way down the right side and if you’re too long you can be through the fairway and if you hit it a bit right you can be blocked by the trees, so you’re punching out and you’ve wasted a shot on a par five.”

Burton says it will be fun for members to come out to watch the young players and even some of the older players that are playing, seeing first hand the level of golf Alberta has to offer.

“We do embrace the outside events we host and we’re doing our part to grow the game, being a part of growing the game I think is lending your course to events like this,” said Burton.