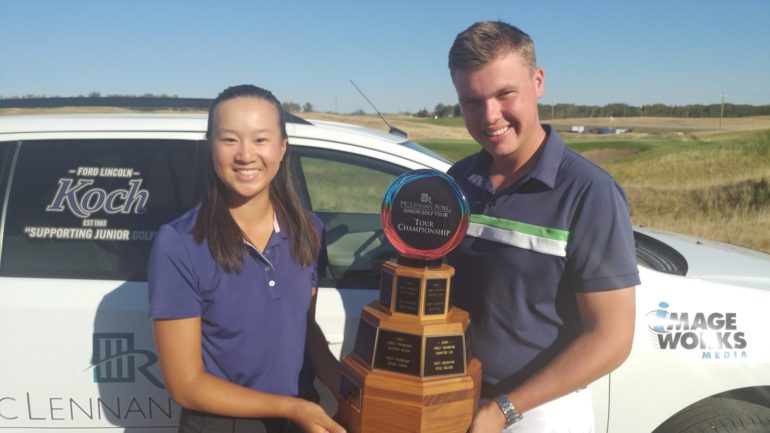 Being a young golfer in Alberta is like being a kid in the candy store… so much to choose from to satisfy your craving.

Each has its own schedule in Alberta, some are just one-day tournaments while others are two days, making for a busy summer of golf for some juniors.

This will be the 23rdyear of the McLennan Ross tour which operates strictly in Alberta.

An entry level tournament experience for kids is how he describes the McLennan Ross but it’s also much more.

“We get lots of very good players playing. I mean you need to shoot par or better at most events to win but we tend to see more kids in that 10-15-year-old range. If they’re coming to their first McLennan Ross event, chances are it might even be their first tournament period and they grow from there.”

Trent Matson is the National Operations manager for the MJT which came to Alberta in 1999 and he says the tour covers the beginner who has never played the game, to those who are getting their first tournament experience and veteran players who are tour regulars.

He said about 85% of the players teeing it up in MJT events across Canada are the average player looking to get better.

MJT also has a 12 and under mini-tour which is competitive but provides a first experience atmosphere where parents can caddy for their child.

“It’s starting to gain a little more momentum over the last couple of years and we’re going to look to expand it a little bit more this year,” said Matson.

The CJGA has more than 100 stops from coast to coast since it’s beginnings in 1993. Thirteen of those are in Alberta and the tour is open to any player, as long as they fall within the age bracket of 12 to 18.

“We don’t have restrictions of handicap or anything like that,” said C.O.O. Brad Parkins. “They can shoot 110. The doors are open for them to get out and learn the game and play in that environment.”

He pointed to a CJGA alum who shot 164 in her first tournament and then two years later got her scores down low enough to earn a golf scholarship to a school in Florida.

Strong support from sponsors is a common thread for the longevity of these junior golf tours. Things don’t happen without that involvement which can range from cutting a cheque, donating vehicles to chipping in for prizes and lunch for the players.

There is a strong appreciation for those running these facilities which give up the time to host the tours. Mills says they understand the importance of keeping people coming into the game at the front end faster than they are leaving at the other end.

“We’ve seen some of our players actually get into, whether it’s Director of Golf positions or assistant positions at certain clubs and find that they had a great experience at the MJT and they have kept up and try to bring the tour to their facility’” said Matson.

Parkins says the CJGA typically focusses on the main city centres of a province but the question being asked is how to reach players in rural areas.

“Right now, we’re forcing them to travel and that’s another expense so how do we break down those barriers?”.

In the end, all three tours are giving these boys and girls the experience of golf, be as competitive as they want to be along with a chance to meet other young golfers.

“We don’t let them have their phones with them, so they can text each other. We want them to actually talk to each other on the course,” said Mills.

Parkins says the Linkster program has helped ease the fears of some parents who see the word “competitive” and shy away. The relaxed atmosphere makes for a more welcoming feeling for all levels of golfer.

All agree that each tour is about growing the game of golf in Canada.

“I would just like to see more kids playing the game and if we get to that point then I think everyone is successful,” he said.

It’s a win for the players, for the courses and for the future of the game. Just like candy, you can’t go wrong with whatever you choose.