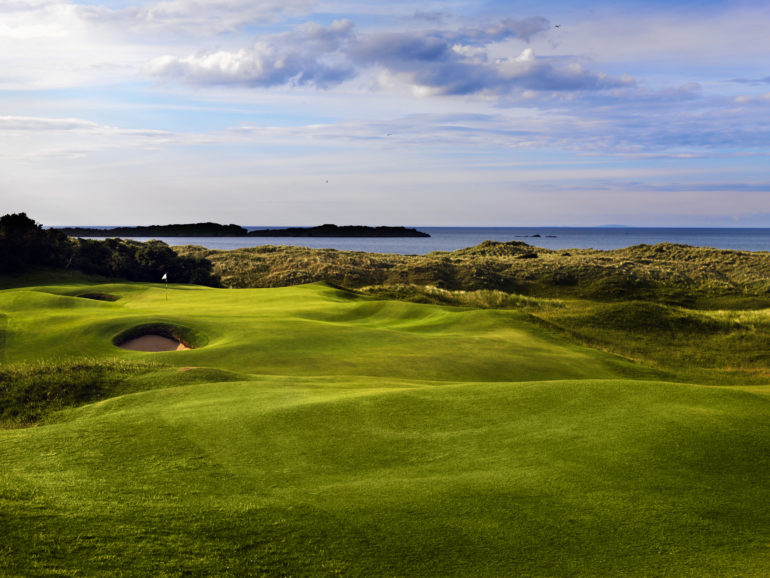 Home of the 2019 Open Championship

You can’t miss this sign as you roll into town: ‘Welcome to Portrush, Major Golf Capital of the World.’ With that billing, it’s about time that major championship action returned to this seaside charmer in Northern Ireland.

Situated along the Antrim Coast, just minutes from the landmark Giant’s Causeway, Royal Portrush Golf Club will be in the spotlight as site of the 2019 Open Championship, marking only the second time — and first since the early 1950s — that the Claret Jug will be awarded outside of England or Scotland.

“It’s been a long time coming,” grinned Northern Ireland’s own Darren Clarke during a trip to Calgary last summer for the 2018 Shaw Charity Classic. “Royal Portrush is one of the best golf courses in the world — it’s brilliant, it is absolutely sensational — and for us to be able to highlight that, going to a global audience, I think it’s incredible. It will be an unbelievable event.”

The global audience should be warned — once you get a glimpse of the Dunluce Links, you will be tempted to immediately book your own trip.

Clarke’s is one of three names on that entrance sign in Portrush, a reminder of his triumph at The Open Championship — around these parts, you should expect a sideways look if you call it the British Open — at Royal St. George’s in 2011. Fred Daly (British Open, 1947) and Graeme McDowell (U.S. Open, 2010) are the other local legends with major victories, while Brooks Koepka’s caddie, Ricky Elliott, also hails from this golf-keen community about an hour north of Belfast. That is a lot of hardware for a town of roughly 7,000 residents.

In July, the best of the best will be digging divots in their backyard. Especially in the era of high-def, you can’t help but watch coverage of the majors and find yourself thinking, ‘Whoa, I’ve gotta play there!’ The good news is that in 2019, it’s more plausible than ever in the past, with three of the PGA Tour’s four biggies being contested at public-access offerings.

Augusta National, of course, remains off-limits to Ordinary Joes and Joans, but the PGA Championship — with its new spring slot on the schedule — was held at Bethpage Black, while Pebble Beach marked it’s centennial by playing host to the U.S. Open.

A fixture on international best-of lists, the prep at Royal Portrush included the addition of two new holes. This linksy layout is every bit as good as the admittedly-biased Clarke says, but golf-trippers are as likely to return talking about the proud and hospitable folks who call this area home. They will point out Dunluce Castle — you’ll be treated to a great view from the fifth green, set smack-dab on the shoreline — and tell you about Michael Jackson’s bid to purchase that historic property.

They can direct you to some of the many Game of Thrones filming locations in this area, or suggest their favourite spot for a meal and a pint of Guinness.  If there’s a downpour of rain (“Just a wee spit”) or a wicked wind (“Just a wee breeze”), they might even offer to lend you their weather-tested gear. And most will be tickled to talk golf, not only their dandy Dunluce Links but the others that make this a must-play destination for the par-seeking public.

Just up the road and up the Antrim Coast is the Strand Course at Portstewart, with perhaps the finest front nine you’ll find. Located about two hours away on the opposite side of Belfast is the scenic and stout Royal County Down, which topped Golf Digest’s latest listing of the World’s 100 Greatest Courses. (You won’t have to scroll much further to find Royal Portrush, ranked seventh.)

On this particular night, just a short drive from Portrush in the pub at The Bushmills Inn, the man at the microphone paused between tunes to poll the polo-shirted crowd. “Have you been humbled by our golf courses?” he asked with a crooked grin. “When people tell you it takes a lot of balls to play golf in Ireland, now you know what it means!”

Once headline news for all the wrong reasons, there has been peace in Northern Ireland for the past two decades. In July, the spotlight shines on these deserving people and this special destination.

Royal Portrush has once before hosted the British Open, with Max Faulkner winning in 1951. It’s time for a new chapter for the self-proclaimed ‘Major Golf Capital of the World.’

“I’d be foolish to say I ever thought we’d get through the dark times in Northern Ireland to get to this stage where we have the biggest and best tournament in the world,” Clarke told reporters when the R&A announced that his home club would host the 2019 Open Champ

Now, you really should see it for yourself.