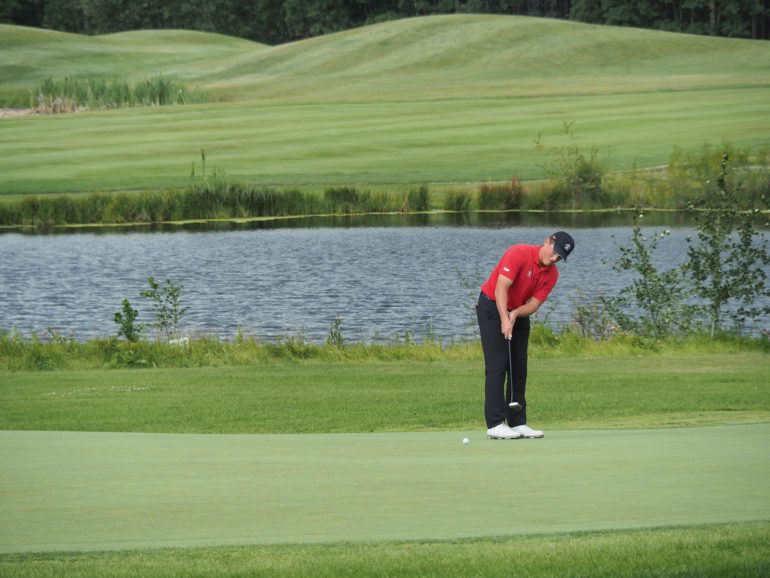 There is one official site for this summer’s Sun Life Financial Alberta Men’s Amateur: RedTail Landing. But when the players post their final scores they will probably feel like they have played four different courses.

“Every time you play it, even on back-to-back days, it can feel like a completely different course,” said RedTail Landing head professional Joshua Davison.

The big reason is simple: the wind.

“The prevailing wind is from the north-west. But if the wind switches, which it often does out here, and comes from the south-east it can be a two-to-three club difference.

“Nobody gets bored at RedTail.”

A $6-million links-style project designed by Puddicombe Golf which opened in 2003 – just in time to host that years’ Alberta Open – the course’s chameleon-like variety is also accentuated because of the five very distinct tee boxes which range from 5,500 yards all the way to a staggering 7,300.

Davison expects the course will play closer to 7,000 yards for the Amateur. “In all likelihood it will be a hybrid of our black and blue tees,” said Davison, who has been on board at RedTail from the beginning and has been the club’s head pro since 2009. “That will give the lads more than enough of a test.”

At its sternest, RedTail Landing can be a beast. But Davison doesn’t want to see that happen for the Amateur.

“Some courses toughen their layouts for tournaments – making the course as tough as possible. But I’m of the opposite frame of mind and Alberta Golf and I are on the same page regarding this approach to course set-up.”

“I’d like to see it set up so the guys can light it up. I’d love to see something like 15-to-20 under par win it. That would be awesome.”

“You don’t want the general public to see high scores; I don’t want anyone thinking that this course is impossible or get the idea that it’s so tough that only the best can play it.”

“There are different kinds of tough,” Stuart Hendley, a multiple international and Canadian Tour winner, prior to winning the 2003 Alberta Open. “There is gimmicky tough, unfair tough and then there is RedTail, which is just tough. It’s tough but it’s fair. There isn’t anything gimmicky about it. Not one weak hole.”

“It will be fair just as it is for our clientele on an everyday”, concurred Davison.

Going low at RedTail isn’t easy. Especially if the wind howls the way it can. But with its generously wide fairways and perfectly manicured greens – “if you hit your putt on line it’s going to go in,” said Davison – it is possible as James Love demonstrated when he shot a course-record 64 in the 2005 Alberta Open – a score which was equaled by Royal Mayfair assistant professional Mike Belbin in the 2015 Alberta Assistants Championship.

“I’ve always liked RedTail but then I’ve always liked Puddicombe designs,” said Belbin. “It gives you a bit of everything and it tests every part of your game. It doesn’t force you to lay up off the tee; you can hit driver on most of the holes.

“The Par 3s are probably the most difficult part of the course.”

A solid test of golf from start to finish with great variety and not a single cookie-cutter hole, RedTail Landing is also home to what was easily the favorite hole in an ‘Edmonton Journal’ survey of 40 Edmonton golf pros and managers: No. 11 which has been nicknamed Oceans 11 because you have to go over water twice – first off the tee box and then again on the approach to the green.

“No. 11 is a great Par 5,” Jagare Ridge head pro Tyler Rumpel said in that survey.

“It’s reachable in two for the long hitters. But you’ve got all the water to cross off the tee with fescue on the right and fescue on the left. Then there’s the approach to a well-bunkered green with more water in front of the green.”

“No. 11 is so memorable,” said Davison. “It’s the absolute definition of risk/reward and begins with the tee shot – how much of the water do you want to bite off? Then, if you hit a good drive do you dare go for it in two?”

Davison said No. 11 is the start of their course’s Amen Corner.

“No. 12 is a great Par 3 over water and over sand. The green is wide but shallow.

“Then you get to No. 13 which has a split fairway with a massive water hazard in the middle. Left is the easier tee shot but leaves a more challenging approach where you have to fly the bunkers and land it soft which is certainly possible because the greens hold nicely. Right is tougher but leaves a straight-in approach. Another risk/reward hole.”

“RedTail has always been one of our favourite designs,” said Grant Puddicombe, managing director of Puddicombe Golf which has been involved in close to 100 golf course projects in Canada, the U.S., New Zealand and Japan.

“What you see is what you get and golfers like that. It’s entire character is unique.”

Getting the July 16-19 Sun Life Financial Alberta Amateur is a “feather in the cap” for RedTail according to Davison.

“But the Alberta Amateur is Alberta Golf’s most prestigious event. It’s their baby; it’s their big event of the season. Only the best amateurs play in it.”

“I’m really excited to be able to hop on board. I know Alberta Golf is looking forward to playing RedTail and we’re very proud to be hosting this event. From the owners to the food and beverage staff we’re all very thrilled.”