Looping on the Champions Tour 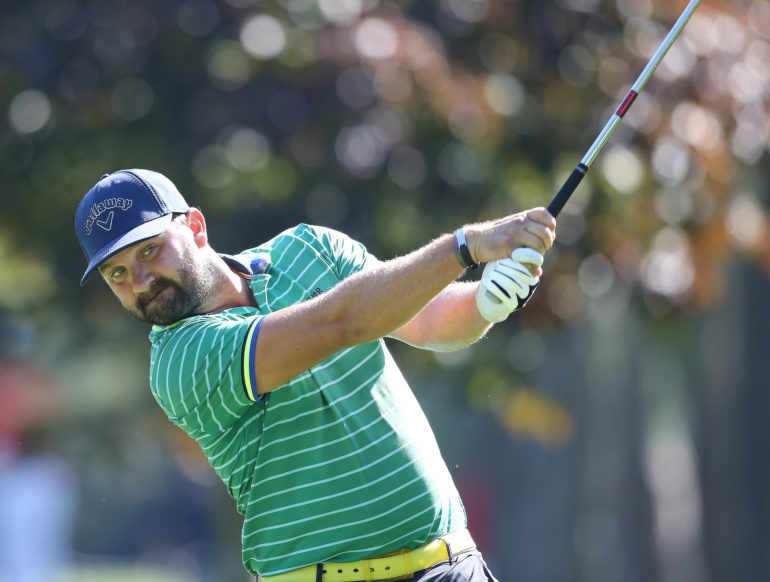 You can dress him up and take him out.

Plus the bonus of playing golf with Danny Sahl is he’ll show you the way.

Yup, the Sherwood Park product is pretty much a jack-of-all-trades golf guy.

How about a golf assistant? You got it.

A dude to carry your clubs? He’s your man.

A little advice on your swing, your game and your wardrobe? Check, check, check…

“I don’t think the dream is dead yet,” said the sharp-dressed Sahl, when asked if he still aspires to be a PGA Tour golfer. “The odds aren’t in your favour — you have to get lucky at the right time. I still think I’m good enough. But I’m 38, and I’ve got to think about the future, and right now…”

Well… right now, he’s letting all the other parts of his golf acumen pave — and pay — the way in life.

So Sahl’s a caddie these days for legendary golfer Vijay Singh.

‘The Big Fijian’ is the second superstar to put Sahl on his bag after Canadian Mike Weir used the Alberta shooter for parts of the last five years.

“I couldn’t pass it up,” said Sahl, who was carrying clubs for fellow Canuck clubber Corey Conners, a Web.com Tour swinger, when the offer to caddie for Singh came along. “So I decided I was going to try it and see what happens. We ended up finishing second in the first event (the Senior PGA Championship last May), so he kind of believed in me and we got along great. It’s been kind of a nice run so far.”

Singh, 54, has been splitting time between the PGA Tour and the PGA Tour Champions, double-dipping on two of the sport’s biggest stages.

That’s given Sahl plenty of work as a caddie — and a pretty good golf education to boot.

“I guess everything happens for a reason,” Sahl said. “Caddying for Vijay has changed a lot of things as far as making money and seeing different parts of the world (including golfing in the Fiji Open in Singh’s home country). I’m really fortunate to get this opportunity and happy with what’s been going on.

“And I still have the drive to play, so I’m trying to keep my game as sharp as I can,” continued Sahl, who’s found time in the past to try to Monday qualify for Web.com Tour events. “Working for Vijay, he’s known for his practice and his work ethic — he works hard — so just being around him really inspires me to do as much as I can with my game.

“I always travel with my golf clubs, so on the Wednesday of a tour week, him and I will find a premier golf course in the area we’re in and I get to play with him.”

And Sahl always does that in style.

He’s the guy you see on the links looking like a fashion plate, sporting the Italian brand Colmar — for whom he represents — often decked out in high socks, cool shoes and colorful clothing.

“I’ve always liked to be ahead of the curve,” said Sahl, who’s carried that chic look over to caddie duties.

“They say caddies aren’t supposed to dress too flashy to create attention, but it’s getting a little more lenient out there. Vijay doesn’t mind it, so I’m going to keep doing it.”

He’ll keep caddying too, unless something bigger — such as playing on the PGA Tour — comes along.

“I don’t know why they keep me around,” said Sahl with a chuckle. “I do know the game — I’ve had some success playing it. And I’m very good with people and how to manage them. I’m good to recognize when something isn’t going well to suggest something different. I have a really good eye for what a player is feeling and what he’s doing on the golf course.

“With Vijay, he knows I have good mental energy for him and we get along great. And I’m going to do whatever he wants me to do. And I enjoy being around him and being on the golf course and being in the game. So it’s a great fit for me. I think we’ve got a good team going.

“A guy in my shoes, when the professional golf ends, what do you do?” added Sahl, who’s quick to thank those who’ve always believed in him.

“I couldn’t imagine the money I’m making doing anything else. So I’m not going to pass up the money I make caddying.”

Looping on the Champions Tour