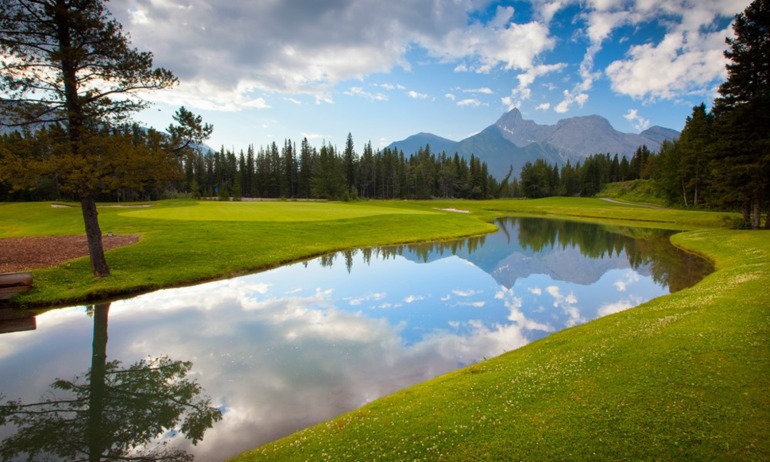 Kananaskis Country Golf is back on course! Q and A session with Kevin Smith and Kananaskis Country Golf Course Head Pro Bob Paley about the 2018 re-opening of the Alberta provincial gem that was destroyed in the 2013 flood. The Gary Browning led restoration of the 36-hole layout is complete. 18 holes open for play in May of 2018 and all 36 holes open in late summer 2018.

Q: What did you take away from the dozen or so sneak-a-peek events you had in the fall of 2017 where supporters of the restoration of the golf course got to play the restored Mount Lorrette course?

Q: What was the feedback from people who had a chance to play the course?

A: We had high expectations going in and it exceeded every expectation that we had. So great to see the smiles on people’s faces when they got out there and just to see some of the reaction and the feedback that we got. The fact that the greens were as pure as they were and the golf course just felt more playable, it is a little bit more wide open and fun to play. Just everybody was blown away by the shape of the courses and the experience of the day and getting a chance to hear our story and that’s something that meant a great deal to us as well.

Q: During the sneak-a-peek you recounted a story just after the Evan Thomas River spilled it’s banks in 2013. You had called course superintendent Calvin McNeely and told him there’s a big problem here and the course could be shut down for a couple weeks. Could you have ever imagined it would be closed for five years?

A: No not at all. But there were some people who didn’t think it would happen (Golf Courses getting restored) at all, certainly nobody on our team, we believed it was going to happen but no I don’t think anyone thought it would take the amount of time that it did take but for a variety of different reasons it did. Bottom line is we got to the finish line and we can’t wait to get back being open with renovated facilities and two brand new golf courses and a new team and creating some unbelievable experiences for our guests and our team. I think it’s going to be super emotional just to see people and see smiles on people’s faces and just to have other human beings here with golf clothes on instead of vests, and to have their equipment and golf clubs and not jack hammers and excavators.

Q: Are Albertans being handed back two golf courses that are even better than before the flood?

A: Absolutely, it’s just a better version of itself. No matter the golf course whether it’s Augusta National, Pebble Beach or St. Andrews they all go through renovations and restorations and our course is no different to that. One of the silver linings to this whole project was to look at every hole with Gary Browning and our management team who have been out here for 30 years and just evaluating every shot on every hole and what could be done and all with the thought in mind that this was a restoration. Even if there were no design changes there were better grasses, better irrigation system, better drainage and on a number of holes there are improvements to the green structure. The courses are now more inclusive than it was before. The courses were built during a time that was pretty punitive, the harder the golf course the better and that’s something we really wanted to address. We’ve added two new tee boxes that are shorter than the previous ones so right now the yardage range is anywhere from 3,600 yards to 7,200 yards on one golf course so essentially the new tees cut the golf course in half so people who have never played before have an opportunity to come out and play a game of golf on a course that’s fitted for them and that’s super exciting for us.

Q: When and how can Albertans book tee times for the 2018 re-opening season.

A: Tee time bookings for individual bookings will start online on our website kananaskisgolf.com on Monday, March the 12th at 8am mountain standard time. And then Wednesday, March 14th at 8 am mountain standard time our phone bookings will be on our toll-free reservation line 1-877-591-2525. As for what we expect there seems to be a significant buzz about the re-opening of the golf courses and people wanting to see what’s been done to them and how they’ve changed. One of the challenges is that we’ll be opening 18-holes on May 10th, around June 1st to 27 holes and around August 1st to 36-holes so we’re not going to be a 36-hole complex right from the start so that’s going to minimize our inventory a little bit so just another reason to try and get your tee time bookings in a little bit early.

Q: How much more protected from future flooding are the golf courses now?

A: In March of 2016 there was a separate project running next to ours that was a river restoration project and what it did was fortify the river bank from the south end of the property, the Evan Thomas River that separates Mount Kidd RV Park and our golf course, all the way through to the north part of the property near the water treatment plant is and the 14th hole on Mount Lorette. The berms have been built up, big rip rap rock has been used to fortify and build up the berms that were in place before so those are higher which has given us some pretty cool looks on holes as well. So were confident we’re in a better spot than we were in before the flood, I don’t think anybody in this world would ever say you can mother nature proof or water proof anything but we’re certainly in a way, way stronger position than we were pre-flood.

Q: You’re a head pro but you live on the golf course and were part of the restoration team. I’ve seen you out here with the hard hat and construction vest on, what do you know now about restoring a golf course that you didn’t five years ago?

A: It’s mind blowing. When we were going through the whole process there were just so many revelations like seeing mounds on a fairway and thinking that just must have been what was there and not knowing it had a specific purpose as it relates to drainage or how greens are built and what an architect looks at and feels and how the process works. Blown away by the number of people that it takes to build a course and the pride that these people put into creating a golf course whether they are the designers, the on course workers, the contractors, it’s amazing. That was one of the many silver linings for all of us, not just myself, to learning what the construction process is all about and to have a hand in it creatively and seeing the changes that we think are going to be best out here. I know way more now than I probably ever should but I’ve been blessed to be a part of this whole thing.