In a time crunch? Try 9 instead of 18 and relax 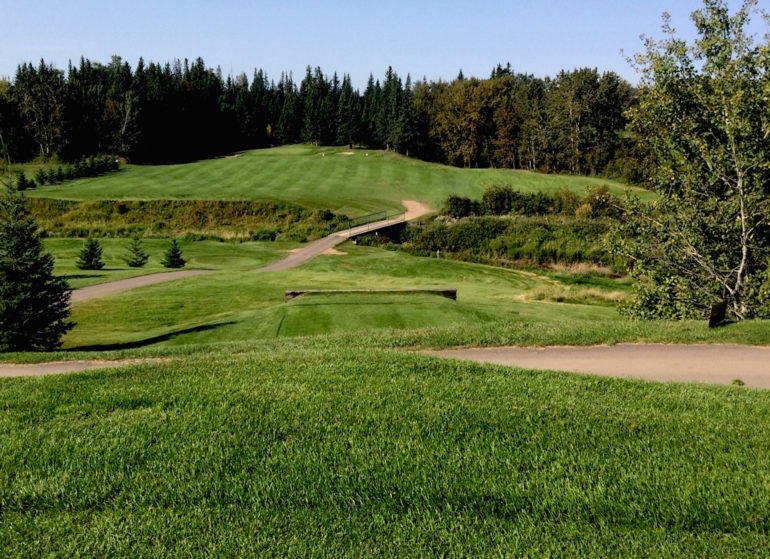 If you’re one of those who think a round of golf takes too long, here’s a suggestion — cut it in half. Rather than playing a full 18 holes, try nine holes. After all, that should take about half the time freeing up some time but also still allowing you to enjoy a golf outing.

A recent mandate of Alberta Golf has been to get more people playing more golf. To them it’s about getting out and playing no matter how many holes your round is comprised of. To help you play more in less time, we’ve tracked down some great 9-hole courses throughout Alberta in an effort to entice you to take up the shorter game.

A great place to start is at the oldest golf course west of Winnipeg, located in Fort McLeod. Teeing it up here is like stepping back in history as this little gem was first opened in 1890 by the North West Mounted Police. While the original design has been changed somewhat, it still harbors remnants of its past including a former buffalo wallow.

A second wonderful little layout, Living Stone Golf Course, is just outside Calgary. This beautiful foothills track is a fun play and for those who struggle getting out of bunkers, there’s some great news — there are no bunkers here!

Moving further north, a unique round is found in Daysland, where of all things, their little layout offers a beautiful island green. Built by the members, the hole is a delightful change from the typical small town prairie course. This test plays to only 120 yards, and the green is large, but if your aim is off you simply aren’t getting that ball back.

A short drive outside of Lloydminster, the Kitscoty Golf Club offers up a taste of the game from years past with its sand greens. If you’ve never putted on sand, find a course that offers that type of green simply to see where today’s superb putting surfaces came from.

North of Westlock, Hidden Valley is indeed a hidden 9-hole gem. Designed and sculpted by owner Tony Dirks, this pristine layout offers challenges you might expect only on bigger courses, including a couple of dramatic elevation changes going both up and downhill.

Another great short track is found near Teepee Creek where River Stone lets you arrive by land or water. If you take the latter route, a golf cart will pick your party up and transport you to the upper levels of the reclaimed gravel quarry. It offers dramatic elevation changes and ends with the huge par 5 9th hole at 658 yards.

And if nine holes isn’t quite enough, Pineridge Golf Resort west of Edmonton offers up a bonus of three extra holes, making it the only 12-hole course in Alberta, an idea long touted by none other than Jack Nicklaus.

So, if time is a constraint, play nine this year and savor the challenges, plus the time saved, during a shorter round of golf.

In a time crunch? Try 9 instead of 18 and relax