Get Involved as a Golf Coach 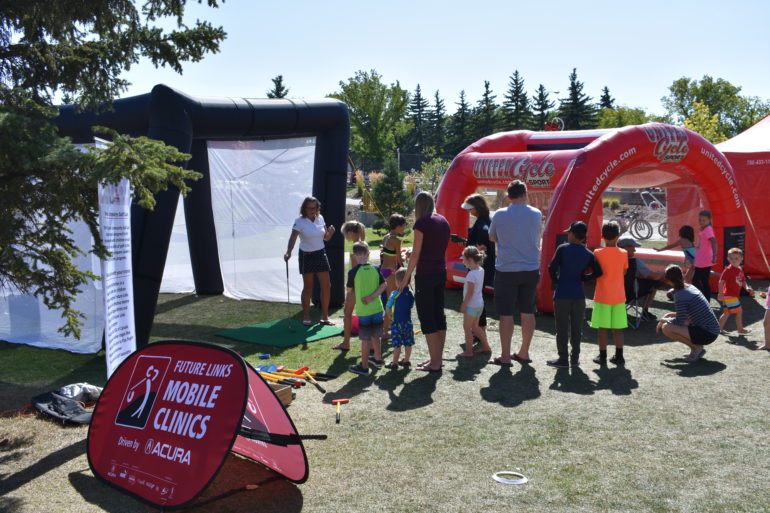 Golf is hard. Everyone that has played the game knows that. But now a program offered by Golf Canada and the PGA of Canada is making learning the game for newbies much easier thanks to an expanded coaching program.

Participants in the Community Golf Coach program can lend knowledgeable assistance by becoming competent in the skills required to give kids a great start in the game of a lifetime.

While there are many goals within the program, the main ones focus on growing the game by teaching youngsters the right way to step into the sport. They include topics such as safety and risk management, rules and etiquette, equipment, life skills, and ethical coaching.

Bill Murchison, the Director of Instruction at the Golf Canada Calgary Centre, who is an instructor with the Community Coaching program, said it’s a key part to ensuring young players get the proper start in the sport.

“The thing is with the golf professionals is as many as there are, this just gives us that many more people that are able to help at an entry level situation,” he noted, adding kids that reach high levels in hockey or other sports have generally started out with this same sort of community coach volunteers at the younger levels. “If we can expand the number of (trained) coaches we have, we’re obviously going to get to help more kids earlier.”

Alberta Golf, the provincial governing body of the sport, buys into the Community Coaching program in a big way, said the association’s executive director, Phil Berube.

“As an avid golfer, if you’re able to, and willing to give back the time, the program is awesome. It’s not meant to replace qualified instruction but rather complement qualified instruction. That’s the way we’re going to grow; it’s an approachable way to penetrate the market. It’s been embraced by the PGA members who have gotten involved with it,” along with the community coach volunteers.

One of those community volunteers is Lois Gilbertson. She has helped an untold number of youngsters get early hands-on training through unique ways outside of simply picking up a golf club and swiping away at hard-to-hit objects.

“Anybody can help anybody when it comes to coaching,” she began. “There are lots, and lots, and lots of kids out there,” who are looking for something to fill idle time. Gilbertson noted she just recently completed the Community Golf Coaching program and has worked with “probably over a thousand kids in just the last year.”

A course like this gives the youngsters a solid learning platform from the start and it’s done in a fun way so they don’t lose focus while learning, she continued.

“The way they do it now, it’s fun. The kids show up and they’re hitting (oversized) balls into nets with velcro on them, they’re doing whatever to get them involved. Most of the time it’s just wonderful. The kids just love it!”

“I used to think to myself, ‘Ah, I don’t know about that (sort of teaching idea). I teach golf. You use real clubs, real golf balls. Now, you just let them swing and have fun. It’s not a real club but as they get older you change,” to standard golf gear as skills improve.

As for what this gives the instructor, Gilbertson suggests that feeling of accomplishment for a coach in watching a young person’s love for the game grow is worth the weekend it takes to become recognized as a trained Community Golf Coach.

In closing, Murchison said the importance of this program to the club pros who have community coaching trained volunteers is indeed priceless.

“It’s so valuable. The club pro, by nature of the way the job has always been, there are never enough hours in the day to do what they love to do. And their favorite thing is to be out there with the kids because it’s so rewarding. The bottom line is they just don’t have enough hours so if they can have some people around that have a trained background, their support is just a bonus.”

Get Involved as a Golf Coach