Catching Up with Jaclyn Lee 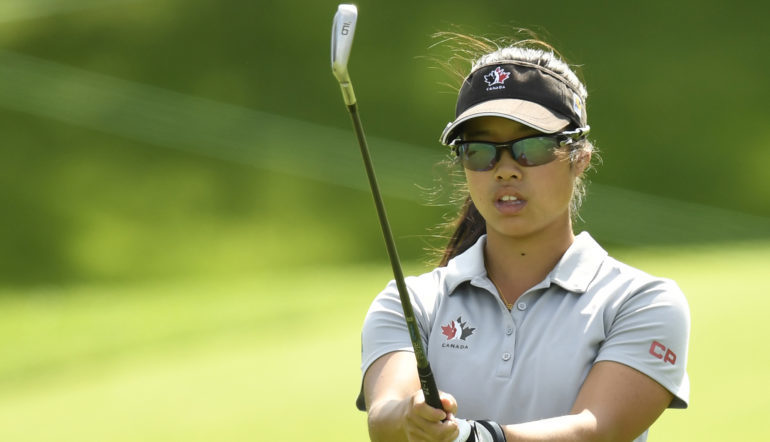 Jaclyn Lee of Calgary is one of the top young female amateur golfers in the country.

Born and raised in Calgary the 20-year-old is a member of the Glencoe Golf and Country Club. She is a two-time Alberta Amateur champion and a member of the Canadian National Women’s Amateur team.

In 2013, she tied for fourth in the Canada Summer Games and tied for eighth at the Canadian Junior Championship. She won the 2014 and 2016 Alberta Amateur titles and tied for 15th in the World Junior Girls. She’s competed in the last four Canadian Amateur championships, finishing 17th last year and tied for 59th in the LPGA Canadian Open last year.

Question: How did you get into the game, and at what age?

Answer: I started playing golf in Kelowna when I was 10. We had a place there where we spent the summers and my parents (Stephan and Maria) wanted my sister (Carolyn, 22) and I to get into golf, which seemed like a natural family outing.

My parents didn’t really play, but they tried to get into it when we started. My dad did play a little before, but he wasn’t that good and when my sister and I got better they both stopped playing with us (laughs).

Q: Did you progress quickly? Were you a natural at the game?

A: To be honest I hated the game when I first started. I didn’t like it much as it was summer and I wanted to do things with my friends rather than golfing with the family. But there was a course marshal in Kelowna and he told Carolyn and I we should take it more seriously as we had a natural talent. He saw something special in us and said we should try to practice and take lessons and try to get better. I’m a hard worker no matter what I do and that transferred over to golf as well.

Q: So, when did you start to like the game?

A: I’d say around 12. I started playing tournaments when I was 11 and they scarred me. I didn’t like the thought of playing tournament golf. Playing in club championships was fine, but I felt a lot of pressure in tournaments, and that’s weird as I was 11 years old and what pressure do you have when you’re 11? But with the competition and everything I felt nervous, but I’ve grown to love the game and the challenges that it possesses. I’d say it’s a love-hate relationship but more love. There’s just something about it that makes you come back.

Q: Was there a time when you knew you were good at it?

A: I don’t think there was any specific time. I just kept working and practicing and doing my thing. Golf is something unknown and I don’t think you can feel comfortable and feel you’re really good. I think with golf you can always get better. I believe in myself but I never tell myself I’m really good and I should turn pro. I’ll keep working and see how far it will take me.

Q: You progressed quickly on the national scene and played in the LPGA Canadian Open last year. Was that possibly your career highlight so far?

A: It was one of my proudest achievements so far in making the cut and winning the Marlene Streit Award as low amateur. That award meant a lot as I know Marlene personally and she’s a great women and is always out supporting us. To get a medal in her name was really special.

Q: Did you have a home course advantage with the Open at Priddis Greens in Calgary?

A: No, I had never played Priddis before. But it was great playing in my home town and having everyone out supporting me.

Q: You’ve done well at the provincial level in both junior and amateur, is that something you can take pride in as well?

A: I was 17 when I first won the Alberta Amateur and I really went in with no expectations. I knew Jennifer Ha and she was always strong. She was dominating when I was just starting up and I looked up to her. But I managed to put together a couple good rounds and came through. That was another of my favorite memories.

Q: You’ve been competitive at the national level in the junior and ladies amateur, but never won. Is that a disappointment?

A: At the junior level I had to pull out my final year (two years ago) because of a wrist injury, which didn’t allow me to be at my best. Plus there’s a lot of good competition.

Q: You attend Ohio State University. Did you always want to get a scholarship south of the border?

A: I didn’t get into golf to get a scholarship, it just kind of happened that I progressed in the game and wanted to take it to the next level.

I chose Ohio State because of the coaching and practice facility. I know it’s a Northern school and snows there, but I’m used to having a bit of an off season. They also have a $6.5 million practice facility, possibly the best in the nation, so that made up for it being a bit chilly. Plus I wanted a school, not only for golf, but good academically.

Q: Academically you’ve done well being a two-time All-American scholar and OSU Scholar-Athlete and last year an Academic All-Big 10. As for golf, last year you were on the All-Big Ten second team and finished ranked in the top-100 nationally. You had three top-five finishes, five top-10s and eight top-25s. This season you won your first NCAA tournament. Are you pleased with your game there?

A: I didn’t start off well as a freshman, but I kept plugging along and finally received a NCAA medal this year. That’s a nice accomplishment and I still have a year-and-a-half remaining.

As for my statistics, I really don’t pay much attention. Not sure who keeps them.

Q: The last five years you’ve been with the Canadian Amateur Team, the first two on the Development Team. How important has that been for you?

A: It’s been an immense help in helping me grow as a person and my golf game. The Development Team helped prepare me for college in that you’re gone three or four days at a time and missing a lot of high school. You learn how to travel and take care of yourself and be responsible.

There was one time two of us had a flight cancelled in Chicago and that gave you a feel what life is like and you learn new skills.

Plus the support staff is amazing. I don’t have enough good things to say about (assistant coach) Ann Carroll and (head coach) Tristan Mullally. Both of them have impacted my game positively. There is so much I can learn from Tristan … so much knowledge. I trust him completely and we’re working on things with an end goal as to what I want to achieve. I believe my game has changed completely for the better.

Q: What would say are your strengths and weaknesses?

A: Ball striking is a strength. Always has been. I need to continue to work on my short game, but then also work on the long game as well. But yes, driving the ball is a strength.

Q: What about putting?

A: It’s OK and I’ve seen an improvement in putting this last fall, but you can never improve enough.

Q: Did you learn as much about the mental side of the game as the physical side with the National Team.

A: I’ve learned so much mentally and on the golf side. It’s great to have that support… you get a glimpse into what professional life is like.

Q: As a member of Team Canada you will have a busy summer, but what are your plans?

A: I haven’t really looked at my schedule yet, but I hope to compete in the World Championships in Ireland. The top three from our (four-person) team go and I’m gearing up for that.

I’m not sure if I will play in the Alberta Amateur or not, depending on what else is going on. But as member of Team Canada I will be in the Canadian Amateur.

Q: I understand you have a slight wrist injury, which you had a couple of years ago. How is that coming along?

A: I’ve been healthy the last couple of years, but I re-injured it in October in our third (NCAA) tournament of the season. Right now, I’m just nursing it back so I am healthy, but right now it’s wait and see.

Q: I’m sure you hope to be completely healthy by the busy summer. And will another berth in the LPGA open up?

A: It depends on who they take as well as on exemptions. I hope so but it’s up in the air.

A: For sure. I have another one and a half years before I graduate and there’s been some sort of a change in the process for Q-school, so not sure yet about that, but I’ll sort that out. I’d love to turn pro after college and see where it takes me.

Catching Up with Jaclyn Lee