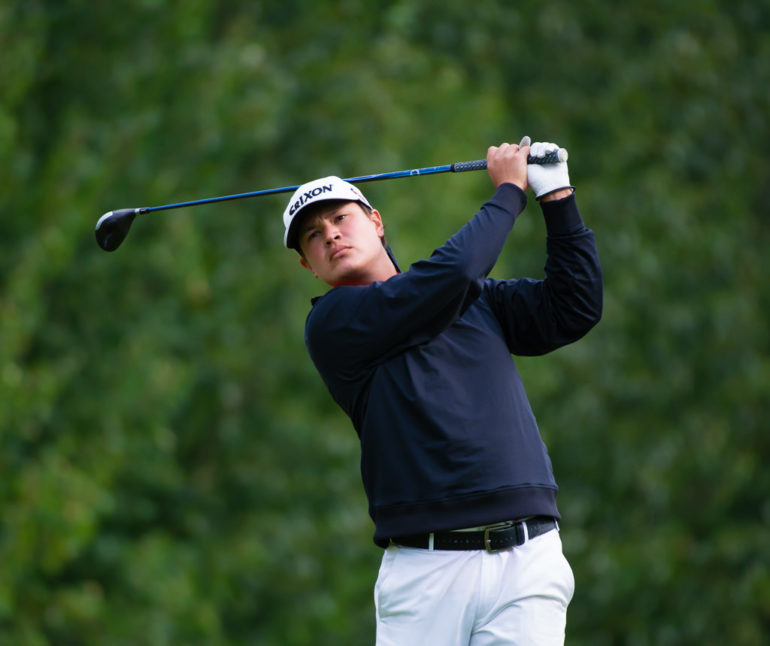 Golf fans in Alberta love keeping track of what tracks the top players in this province will be on during the 2018 golf season. Whether it’s the Symetra Tour, Mackenzie Tour PGA TOUR Canada or the Web.Com tour, all the pros who grew up in this province have one goal in mind, win a tournament.

The two players who seem closest to doing that and knocking on the door to play on the best tour in the world are Calgary’s Ryan Yip and Jennifer Ha.

Yip, who now splits his time between Scottsdale, Arizona and Ohio is 33 years old and has full status on the Web.com tour. Jennifer is 23 years old, lives in Naples, Florida and is coming off her first full season on the LPGA Tour. Ha wasn’t able to keep her LPGA tour card and will play this season on the Symetra Tour, she says her experience on the LPGA Tour was unreal.

“It was crazy. So many great experiences, I got to meet so many of my heroes and it was unreal. I didn’t have the year that I was planning on having and I didn’t play that well but I had such a crazy learning experience. I’m really fortunate that I had that privilege, it was really cool. I had a little taste of what it was like and it totally put fuel to the fire and I really want to get back on there.”

A top 10 finish by season’s end on The Symetra Tour which starts in March in Florida will get Ha back to the LPGA Tour. “I’m hoping I’m one of those 10.”

And she says she’s much more mature now, with a little help from a veteran peer on the top tour in the world.

“I had a lot of help from Alena Sharp, she was amazing. She played practice rounds with me and took me out to dinner and made me feel super comfortable and that helped a lot. I feel a lot better now and lot more patient then when I first got on tour.”

As for Ryan Yip, he’s had full status on the Web.com Tour for half a decade now and says he’s never played better. A couple years ago he finally got a swing coach, a trainer, a chiropractor and is injury free.

“I feel like I’m playing the best golf in my life right now and it’s only a matter of time before I put four good rounds together and win out there and get my PGA Tour card.”

Yip says the Web.com Tour is the third best tour in the world behind the PGA Tour and the European Tour.

“It’s obvious. You see guys on the web get their tour card and within ten tournaments they’re winning on the PGA Tour. The competition is so high it basically produces a lot of PGA Tour winners. Always has, always will.”

And that’s Yip’s goal this year, to win on the Web.com Tour “A win plus one top 5 and you’ll take care of your PGA Tour card.”

Seeing fellow Canadian and Kent State grad Mackenzie Hughes already win on the PGA Tour has given Yip a lot of confidence that once he gets to the top tour, he can win there too.

Four other Albertans will be aiming to win tournaments on the Mackenzie Tour – PGA TOUR Canada.

Jamie Sadlowski, James Love, Wil Bateman and Riley Fleming all have varying degrees of status on the Canadian circuit that has seen a huge rise in standard the past few years.

Sadlowski has the highest profile of these golfers considering he’s a former 2-time world long drive champion and has a personal best long drive of 475 yards. In 2016 the Edmonton native switched to stroke play golf and proved he has a bright future there too by winning a U.S. Open qualifier and making cuts on the Web.com Tour.

Sadlowski doesn’t have full status on the Mackenzie Tour – PGA TOUR Canada but plans to go to Q School and if all goes well play a full slate in Canada this summer and maybe some Asian Tour events before then, he’s also hoping to get sponsor exemptions into PGA Tour events. Sadlowski, a Scottsdale, Arizona resident says he’s learning the differences between gripping and ripping it during his long drive career and the feel shots you need in stroke play golf.

“When you gotta flip a little 70 yard wedge in there over water to a back pin and you can’t hit it over and you can’t land it short it’s a very different feeling under the gun than standing on a tee and having six golf balls.”

Sadlowski’s goals are to have as good a chance as possible to move up to the Web.com tour.

“I would love one of those top 5 cards but I don’t think getting top 10 on the money is unrealistic and going to third stage of qualifying and not having to mess with the first couple stages is something that I’m chasing.”

James Love is 33 years old and lives full time in Denver, Colorado. The born and raised Calgarian has full status on the Mackenzie Tour after finishing in the top 60 in the order of merit a season ago. He and his wife had their first child, a daughter, in mid-January. Love is hoping being a father might give him a new perspective on the stress of trying to win golf tournaments.

“I haven’t won on the Mackenzie Tour in 7 years, the goal is always to get a win.”

24 year old Riley Fleming of Airdrie is also looking for a win on the Mackenzie Tour – PGA TOUR Canada, but he’s not sure how many crack’s he’ll get. He’s entering his 5th season on the tour but doesn’t have full status and doesn’t think it’s worth the entry fee to go to qualifying school. Last year Fleming only played in 4 events but had a chance to win his home tournament, the ATB Financial Classic in Calgary, before finishing top 10, 4 strokes back. Fleming will go the route of Monday qualifiers this year on tour and hopes to play more events than last season.

“Hoping to play eight or nine events but I only got into four. This year I hope to play better in the first three qualifiers. I’d love to say I’m going to play 35 events around the world but it’s hard to do that, it’s so expensive.”

For any of these Alberta golfers getting a win on any tour this season would be money in the bank.