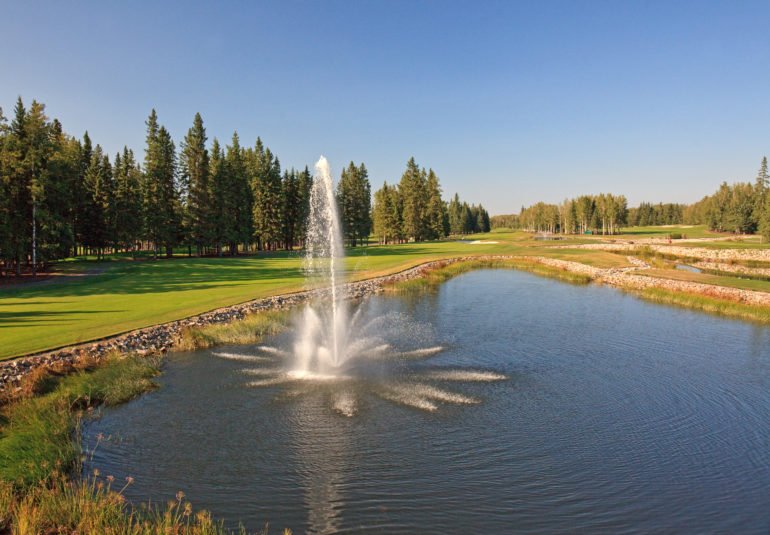 The Alberta Open Returns to Sundre GC
By: Kevin Smith

AJ Armstrong remembers vividly the first time he set foot on the grounds of the Sundre Golf Club.

“The first time I ever went out to Sundre was for a McLennan Ross Alberta Junior event when I was 13 or 14 and I had no expectations at all. You think ‘Central Alberta’ and you’re not really expecting too much in terms of a golf course,” admitted Armstrong. “I was shocked at how nice it was, how good a condition it was in, a hidden gem. I remember comparing it to Augusta because of the pine straw and the trees and how well manicured the course was. I remember it having some of the best greens and it’s been in great shape every time I’ve played it.”

Armstrong, raised in St. Albert, was an amateur when he played the Alberta Open at Sundre in 2017. A teenager at the time, he played well finishing in a tie for fifth, four strokes behind champion Dustin Risdon.

“In 2017, I remember driving the ball really well and I was able to play pretty aggressively. That course is fairly narrow and tree-lined and it’s not very long, so it gives you some options off the tee”, said Armstrong. “Some guys will lay back with irons off the tee but if you’re feeling good with your driver you definitely have an advantage by playing more aggressively.” 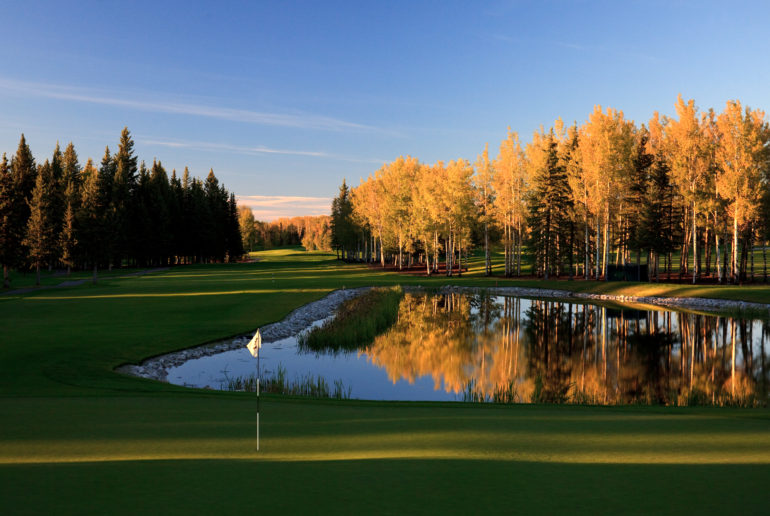 The Alberta Open returns to Sundre Golf Club in late June to kick off the 2022 Championship season at Alberta Golf. Scott Shouldice is the director of golf there and says the course doesn’t favour any specific style of play and could produce an unexpected leaderboard.

“It’s a tight tree-lined course; you have to be accurate off the tee. It’s not the longest course in the world but a lot of strategy comes into play with your club selection off the tee and the greens can be quite tricky as well. It’s an all-around good challenge,” Shouldice explained. “It’s not just bomb the ball off the tee and hit it wherever, you have to think your way around the course. There’s a lot of strategy. There’s a lot of different types of players that could compete well at the event.”

Armstrong, who won the Alberta Open in 2020 on The Links Course at Wolf Creek, agrees with Shouldice that Sundre could produce a much more varied leaderboard.

“The Links Course at Wolf Creek, looking at the field before the tournament even started, you kinda know who’s going to be up there near the end. You gotta hit the ball far and it really separates the guys who can hit their long irons well and have distance”, explained Armstrong. “At Sundre I think you could get a guy who comes out of nowhere if he’s hitting the ball straight enough and putting well.”

Armstrong’s win in 2020 was the biggest of his career and his first as a professional. The Alberta Open is the only event on the Alberta Golf schedule where amateurs compete with professionals, so the 25-year- old whose 2020 win earned him the $7,000 first place prize, is looking to return to Sundre this summer and compete for more than just pride.

“It’s a nice perk to be able to play for something, not just pride, but mentally not much changes. I’m still playing to win and beat the golf course and my game has come a long way since 2017,” admitted Armstrong. “I’m excited to see how the course is with my game now. I have two more years of college golf and two more years of professional golf so I know a little more what to expect and I certainly have higher expectations.”

Both Armstrong and Shouldice agree that the amateurs in the field love testing their game against professionals and it can lead to some great stories. In 2019, Andrew Harrison, then an amateur, beat everyone in the field to take the Alberta Open title at Trestle Creek Golf Resort.

“I think that’s the great thing about this event having a pro side and an amateur side,” said Shouldice. “A lot of younger kids are trying to go off to college and test their game against the best pros in the province.”

Armstrong offered advice for any amateur playing in the event this year.

“Just enjoy it, at the end of the day it really doesn’t matter who you’re playing with or against, you’re just trying to put the ball in the hole,” explained Armstrong. “Every big event you can play as a junior is a great experience and you can take a lot from it. Just soak it all in and give it your best shot. You never know, if you play well you can definitely contend.”

This year’s Alberta Open will shine a light on all of the talented players in our province and also give some exposure to how good a golf course Sundre Golf Club is, although that secret may already be out.

“People are now starting to find out about our golf course and how great it is,” Shouldice beamed. “Maybe it’s not a hidden gem anymore, because now that people are finding out about it, it’s been really busy the past couple of years.”

The 180 members at the semi- private club northwest of Calgary are also excited to welcome the best players in Alberta.

“Oh, the members love it,” Shouldice said. “Last time we hosted we had about 20 to 25 volunteers. Our members came out and helped with scoring and spotting on certain holes. They love being part of the event. They are proud to show off their course and watch the awesome golf as well.”

For AJ Armstrong winning this event again would be awesome.