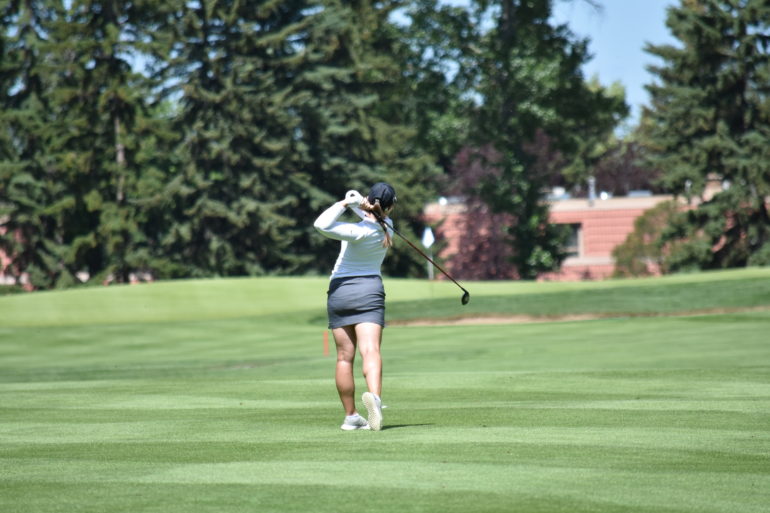 Which means students don’t have to hold down part-time jobs. Therefore, more hours can be devoted to studying and volunteering.

This is what happens in a perfect world.

This is what happens in Celine Copeland’s world.

Copeland – twice the recipient of a scholarship from the Alberta Golf Foundation – never fritters away the windfall.

The Calgarian funnels the money into her education – she’s completed two years of the public-relations program at Mount Royal University – and uses her spare time to help others.

For that freedom, for that financial boost, she thanks the AGF.

“It was really amazing to get that,” says Copeland. “It means a lot. It allowed me to focus more on school and maintain a 4.0 (grade-point average). It inspired me to give back to my community as well.

“Organizations like Alberta Golf, who are giving these scholarships, inspire me to one day do the same.”

In 2017 alone, the AGF doled out 36 scholarships – worth more than $55,000 – to Albertans pursuing post-secondary education.

“There’s no question that the primary role (of the foundation) is to raise funds for scholarships,” says Florin Bergh, a member of the AGF for more than 10 years. “The p.r. we get out of giving those kinds of funds to our youth … it’s a very good advertisement for Alberta Golf.”

For the bursaries, money is raised through individual and corporate donations, through endowments and casino nights in Edmonton.

Since being formed by the Alberta Golf Association in 1994, the AGF has awarded nearly 400 scholarships, totaling more than $600,000.

“That is something that we are extremely proud of,” says Jack Lane, Alberta Golf’s director of business development and communications. “Many of these students have gone on to have successful careers in various fields. If we were a small part of their journey and success, then the AGF has accomplished its goal.”

Recipients are announced a month later.

“I’ve only been in my role for two years, but the scholarship program is something I’ve known about for almost two decades – that’s how institutionalized it is,” says Phil Berube, Alberta Golf CEO and AGF executive director. “The golf community rallies around the foundation… it’s pretty well known and widespread. I’m super proud of what we’ve done.”

Feedback, no surprise, is positive and frequent, according to Bergh. “We get it by email, we get it by letter.”

Someone like Copeland also shows her gratitude by paying it forward.

At Mount Royal University, she helped establish Best Buddies. The 19-year-old is vice-president of the popular initiative.

“It’s about including people with disabilities,” explains Copeland. “We match up people with intellectual or mental disabilities with a university student within Mount Royal. Then they can build a friendship, they can meet weekly or monthly. It’s really a great program.”

This past summer she volunteered with Alberta Golf, which offered experience in her chosen field of public relations. She learned about social media and penned articles for the organization’s website.

Copeland also pitched in at She Swings, She Scores – a collaborative effort between Alberta Golf and Hockey Alberta to introduce girls to the game of golf – and at Jumpstart events.

On top of which, she lent time to the junior program at her home course, Willow Park Golf and Country Club.

Since wrist surgery two years ago, Copeland herself has taken a break from tournament action. Soon, though, she hopes to return.

“Competitive golf is something I really miss,” she says. “I’m really looking forward to that. Golf is such a big part of my life.”

For the bursaries, however, there is no golf-playing criterion. Successful candidates are selected on the basis of financial need and academic standing, volunteer work and references.

“It’s been really nice to able to get these scholarships – I’m so happy,” she says. “The fact that the Alberta Golf Foundation is able to do that, to give back to so many students who are deserving… it’s really neat, for sure.”

She heard about the bursaries three years ago. Then she checked out the website – albertagolf.org – for more information.

“Just seeing the amount of people they’d given them to, then looking at the names and going, ‘Oh, I know them, I know them,'” says Copeland. “Everybody is so fortunate. Just being able to get a scholarship from Alberta Golf, everybody’s so thankful because it helps a lot.”