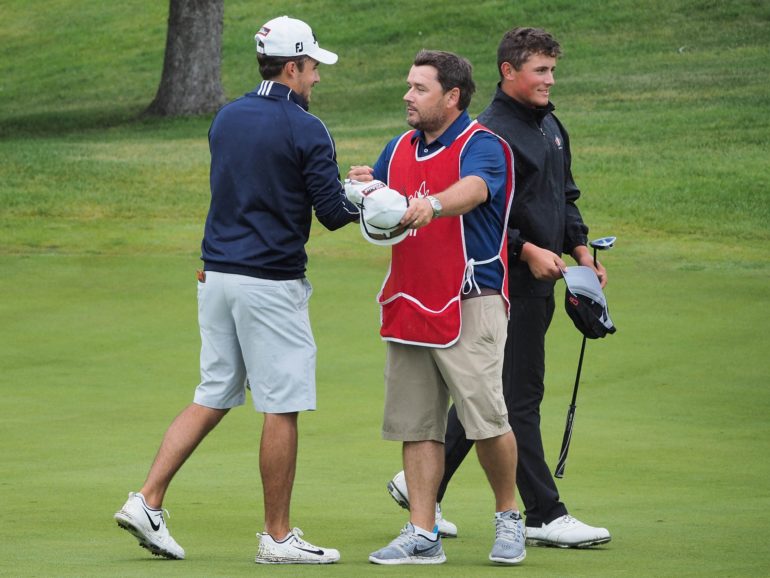 Brett Hogan had just blasted a punch-shot from the trees during a playoff at the 2017 Sun Life Financial Alberta Men’s Amateur Championship and since a few of the spectators around the green — folks with a better view than he had — were “freaking out,” he figured the end result was pretty darn good.

Still, he wasn’t expecting this.

“Max (Sekulic) was dead-middle of the fairway, and he hit a great shot in there,” Hogan said, reflecting on that soggy sudden-death session at Ponoka Community Golf Club last July. “That green is kind of sloped down, so we couldn’t see which ball was which. I hit mine to three feet and he hit his to about 10 feet, but we didn’t know.

“He was up a bit ahead of me and he looked at my ball, and then he kept walking to go mark his ball. And I just couldn’t believe that I had hit it inside of him with that punch-shot.”

By that point, Hogan should have been expecting the unexpected.

It’s too bad that Golf Channel wasn’t filming the action that day, because this see-saw between Hogan and Sekulic was an instant classic.

“Even the last couple of holes before the playoff were pretty crazy,” said Hogan, a smooth-swinging member at Glencoe Golf & Country Club in Calgary and now a two-time winner of the Sun Life Financial Alberta Men’s Amateur Championship.

“Max hit a terrible shot on the second-last hole, a Par-3, and then he hits this unbelievable recovery to probably two feet and saves his par. I was plugged in a bunker on that same hole, and I saved my par.

“And then I remember on the last hole, I had about a five-footer to win because he’d just made this crazy 30-foot birdie putt to tie me if I missed. And I ended up lipping out my putt, so we had to go that playoff.

“Then, on the first playoff hole, he hits this unbelievable flop-shot to, like, two feet again when I thought he was dead and he ties me on that hole. And then, finally, I hit the punch-shot to three feet and somehow win that way.

Of course, the winner will always say that, but Sekulic also has fond memories of what turned out to be a near-miss.

“It was awesome. I mean, how many people get to experience that, where you get to play in the heat of the moment and knowing what’s at stake — a Pacific Coast Am spot and all this stuff that comes with it?” said Sekulic, who won the provincial junior title last summer at Coal Creek Golf Resort and carried that momentum into the Alberta Am the following week in Ponoka.

“It’s so much fun to play for all that. In the end, Brett hit better shots and ended up the winner. He got what he deserved there. But I didn’t give it to him. He earned that ‘W.’ So it was a lot of fun.

“In 2015, I think I missed the Alberta Amateur cut by six shots. So to be in a playoff for the win two years later, it was one of those looking-back moments. It’s good to see how far I’ve come.”

Hogan engraved his name on the provincial hardware for the first time in 2015 at Edmonton Petroleum Golf & Country Club, building a big lead and eventually finishing three shots better than the runner-up.

He also triumphed at the 2016 Alberta Open Championship at RedTail Landing, draining a chip-in on the final hole to seal a two-shot victory.

With his father Brian on the bag in Ponoka, Hogan made his move in the third round, sizzling to a score of 29 on the back nine — that’s two eagles, three birdies and four ho-hum pars — to trim Sekulic’s lead to two.

That set up an unforgettable final round.

Hogan was 5-under for the day when he arrived at the tee-box at No. 11, but he would give four of those shots back. Sekulic, meanwhile, continued to keep things close, then buried that birdie putt on the 72nd assignment for a two-stroke swing.

Tie ball-game, with both signing for four-day tabs of 12-under 276.

A playoff — and punch-shot — would eventually determine the winner.

“I had almost that same shot from the same position in the first round, so I knew how to play it. It was a bit lucky that way,” Hogan said. “Going into the tournament, obviously you’re thinking you want to win and to be able to put myself in the position that I was on that last day, that was nice. It always makes it a lot more fun when you have a chance to win. Just battling it out with Max at the end, it was a great finish. That always makes for fond memories and makes it a lot more special.”

Now 24, Hogan will sign up for Mackenzie Tour-PGA Tour Canada qualifying in the spring, with plans to turn pro. If that’s the case, Sekulic should be considered the favourite at the 2018 Sun Life Financial Alberta Men’s Amateur Championship at RedTail Landing.

“In golf, wins are hard to come by,” said Sekulic, who was also a representative of Golf Canada’s national development squad in 2017. “It’s awesome whenever you get the chance and hopefully the next time I’m in that position, I get it done.”

Hogan, a graduate of the University of Texas-San Antonio, promised his playoff opponent would benefit from that rainy-day heartbreak.

“In our case, if I would have lost, I wouldn’t have looked at it like I gave it away. I don’t think he would feel like he gave it away. We both played well, and one of us played a little bit better in the end. I think it was a good learning experience for him, and I think he’s stronger and better because of it.”

If this was his farewell to the Alberta Amateur, the two-time champion from Calgary certainly ended on a high note.

There will, without a doubt, be times along the professional trail that he reflects on that punch-shot and on that playoff and on a superb performance in Ponoka.

“Obviously, it’s a different level, but I think you have to go with the same mindset — that any week you can beat anybody and anybody can beat you,” Hogan said. “I think the best way to look at it is it’s not that much different. Yeah, it’s the next level with better players, but you need to believe you can beat those guys and earn some of those same experiences that you’ve already had.

“It’s the next level but you can look back on what you’ve done to help you move forward.”