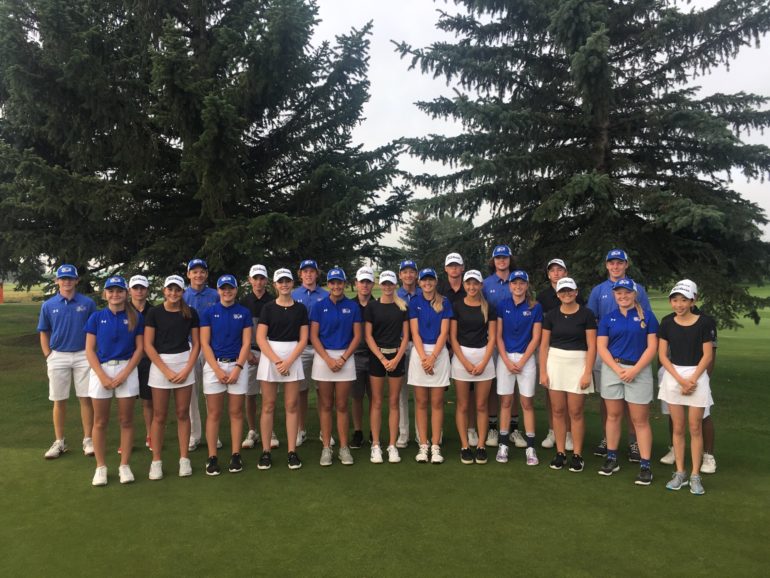 Pictured above: The teams from Alberta (in black) and Montana (in blue) pose for the traditional team photo

Picture Butte Golf Club was the location for the 2019 Alberta vs Montana Ryder Cup and the course and staff were incredibly helpful and courteous. The players from both Alberta and Montana displayed true sportsmanship and played very well. Well done to all the players!

On the girls side, Montana took a large lead following day 1 which included 18 holes of Four Ball matches and 18 holes of Alternate Shot. Day 2 was much of the same as Montana won many of the Singles matches and cruised to a victory claiming the title for the 2nd straight year.

On the boys side, Montana held a 7 point lead following day 1 but the boys battled hard in the singles matches and closed the gap to 3. Team Alberta made a hard push to get back but came up just short. It was fantastic to watch.

About the Ryder Cup Competition:
The Alberta/Montana Junior Ryder Cup was established in 1992 as an annual event between the Alberta Golf Association and the Montana Golf Association. The host club rotates each year between Alberta and Montana. The cross border battle has a rich history of talented youngsters who have used the event as a developmental opportunity on their competitive golf journey. Many Ryder Cup alumni have gone on to have very successful collegiate, amateur and professional golf careers.

Looking forward to next year’s matches at the Whitefish Lake Golf Club!