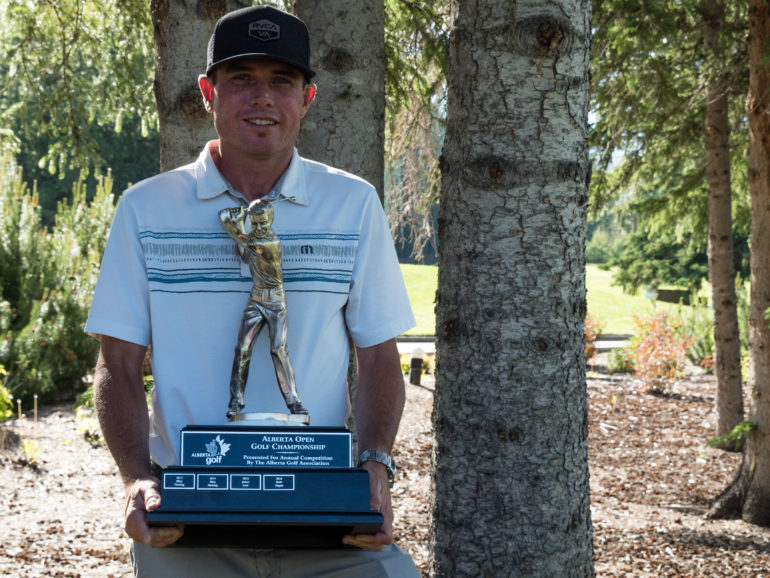 SUNDRE, Alta. (Alberta Golf) – You could call it a case of Dustin being Dustin. The Strathmore native who has virtually been on a winning tear since last year continued his dominant play into today’s final round of the 2017 Scott Venturo Rudakoff LLP Alberta Open Championship.

Risdon shot a final round 69 to win by one shot over Calgary’s James Love. Professional, Ryan Werre, of Redcliff finished tied for third and five-time champion, Wes Heffernan, of Calgary finished at even par in a tie for seventh.

In his winning speech, Risdon said “I always wanted to win this one and now I’ve got my hands on it.” Risdon has been a top player since his junior days, winning the Alberta and Canadian Junior Championships, along with three Canadian Tour wins (Mackenzie Tour – PGA Tour Canada). He now enjoys the game more than ever as he has found teaching the game to be both rewarding and a benefit for his own competitive game. Risdon will put the first-place cheque of $5,000.00 towards expenses for the rest of his competitive 2017 schedule, which now includes his exemption into the ATB Financial Classic on the Mackenzie Tour – PGA Tour Canada.

Evan Holmes, of the Glencoe G&CC, had a one-shot lead in the championship after five holes before making a 10 on the par five, sixth hole when his drive hung up in the trees and was forced to head back to the tee and struggled to get it home.

Low Amateur honours went to Brendan MacDougall of the Glencoe G&CC. The 19-year-old Team Alberta High Performance Squad member made a clutch 5-foot par putt on the eighteenth hole to go bogey-free in the final round. When asked about his accomplishment, MacDougall said “I think it’s awesome. It just really shows that all the work I’ve put in, over the last few years, is really coming together. It shows that I can compete with just about anyone in Alberta.” He will be the number one seed in the Alberta Match Play Championship which starts tomorrow morning.  The Match Play Champion will become the second teammate on the 2018 Pacific Coast Amateur Alberta Morse Cup team.

ABOUT ALBERTA GOLF
Alberta Golf hosts 13 annual provincial championships in order to identify the best golfers in various age and gender catergories. A mix of nearly 1,500 pro and amateur golfers compete on high quality member facility courses across the province. Championships are hosted by a core team of staff and over 100 volunteers. The tournaments promote competition, build pride in the community, support charitable giving and inspire future generations of golfers. They also serve as an opportunity for golfers to qualify for national amateur championships.

The Alberta Golf Association was incorporated as a society in 1912 and continues today as a not for profit Provincial Sport Organization (PSO) operating as Alberta Golf. As the PSO, we are commited to realizing the positive impacts of golf on indivudals and communities across Alberta. Our vision is that through golf, Albertans will enjoy a high quality of life, improved health and wellness, a strong sense of community, economic benefits and personal fulfillment.

ABOUT SCOTT VENTURO RUDAKOFF LLP
Scott Venturo Rudakoff LLP is a multi service law firm based in Calgary, Alberta. Since its establishment in 1986, the firm has become one of Calgary’s leading legal service providers, focusing on delivering high quality, efficient solutions for clients. The partners, associates and staff of Scott Venturo Rudakoff LLP come from a wide range of backgrounds, and this experience enables us to offer responsive, effective and creative legal solutions to our clients.