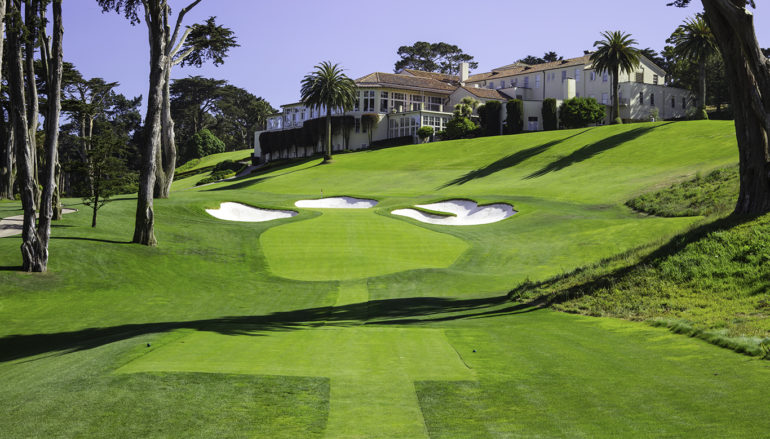 Situated in metro San Francisco and holding a revered position among golf fans and competitors alike, The Olympic Club has welcomed a plethora of elite amateur and professional events, with its latest addition being the Pacific Coast Amateur. Remembered in recent memory for the 2012 US Open, The Lake Course (par 70, 7162 yards), where Webb Simpson reigned victorious, will test the world’s top amateurs over the course of 72-holes.

“The Olympic Club is truly a special venue,” stated Troy Andrew, Executive Director of the Pacific Coast Golf Association, the governing body for the event in conjunction with the NCGA.

“Our Championship has the pleasure of visiting some of golf’s most sought after locations. The Olympic Club sits near the top of every golfer’s bucket list so to be able to invite the world’s best players to San Francisco for a week and have them compete at their peak levels on The Lake Course, is really a perfect Championship situation. We are extremely grateful of The Olympic Club and their membership for having us for the 8th time in our 52 years of competition.”

Taking place concurrently with the first and second rounds will be the battle for the Morse Cup, a 36-hole stroke play team competition using predetermined rosters representing the 15 member associations of the Pacific Coast Golf Association. The team from the Southern California Golf Association looks to make it three titles-in-a-row in the team competition.

Doug Ghim, unable to defend his 2017 title due to turning professional, has paved the way for a new champion to be crowned. With 32 players in the top 100 competing this week (according to the World Amateur Golf Ranking), the Pacific Coast Amateur is shaping up to be remembered as one of the strongest fields in amateur golf all summer.

Leading the charge in the 90-player field is world-number-one Braden Thornberry of Olive Branch, Mississippi. Thornberry, playing in his second Pacific Coast Amateur, has won on the big stage before, notching an NCAA Individual Medalist honor in 2017 as a member of the Ole Miss Rebel program. He looks to improve on his T9 finish from 2017 at Chambers Bay and hopefully bring the trophy back home while heading into a busy summer of competitive play.

Not far behind Thornberry in the world rankings and with an equally impressive resume is Collin Morikawa of La Canada Flintridge, California. Morikawa, a recent team member of the successful Team USA at the Arnold Palmer Cup, is no stranger to competition or the Pacific Coast Amateur. With an exceptional list of accomplishments and having last played in the PAC Coast in 2016, he looks to utilize his experience and survive the week at the top of the leaderboard and keep the trophy in California.

Arguably the local favorites are a pair of San Jose, California natives in Shintaro Ban & Justin Suh. Both Ban and Suh have grown up playing in the Northern California terrain and will pull on their vast knowledge of the prevailing conditions, to hopefully contend come Friday.

Ban, world number 13, is a recently graduated member of the UNLV Rebel golf team. He saw tremendous success over his four years in Nevada, most notably his Mountain West Conference individual crown in 2018. World-number-two Suh, a leader on the USC Trojan team, won six times individually in 2017/2018.

Riding shotgun for the international contingent is Min Woo Lee of Perth, Australia. Lee, the 2016 US Junior champion and eighth ranked world amateur, has chosen to bring his tremendous talent to the Bay area and see for himself what his countrymen have been sharing about the Pacific Coast Amateur over the years. Fellow Aussie and 2-time Pacific Coast Amateur veteran David Micheluzzi of Hampton Park, Australia will be friendly up to the point the first peg goes into the ground. From that point on, both competitors will fight tooth and nail, along with seven other Australians, through the tree-lined chutes of The Lake Course in an attempt to add the coveted title to their résumés.

Recent NCAA standout Matthew Wolff of Agoura Hills, California, looks to keep his summer heading in the right direction with a strong performance in San Francisco. Wolff, touted for his blazing play and unconventional swing, was a member of the winning Oklahoma State Cowboys men’s program at the NCAA’s in late May and would revel in the opportunity to keep the trophy on the west coast in his home state.

Building off an influx in recent years of international representation, the field in 2018 showcases a tremendous amount of transcontinental leaders in amateur golf. Players representing ten countries will be playing starting Tuesday, including those from New Zealand, Japan, Thailand, Chile, England, Norway, Taiwan and the aforementioned Australia.

There will be 12 California residents competing in the field.

All players will be vying for the individual Ed Updegraff Trophy, named after the long-time volunteer and standout amateur golfer who played on three Walker Cup teams (1963, 1965, 1969), won the inaugural Pacific Coast Amateur title at Seattle Golf Club in 1967 and was the 1999 Bob Jones Award recipient from the USGA.

Play for the 72-hole stroke play championship will begin Tuesday morning at 7:30 a.m. Play will conclude with the individual champion being crowned on Friday, July 27. There will be a cut to the low 70 player and ties following round 3.

Held on an annual basis since 1967, with roots dating back to 1901, the Pacific Coast Amateur Championship boasts a rich history of showcasing some of the most talented golfers in the United States and Canada.