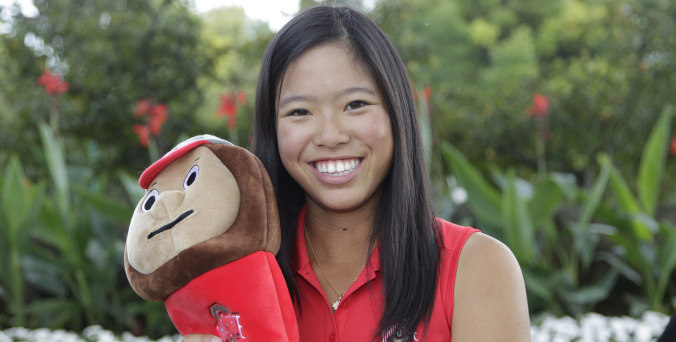 Question: Well, it’s November. Do you get bummed at this time of year, when it’s often too cold to golf?

Answer: Not really. I like having a bit of an offseason from tournament golf so I have time to recharge. Being from Canada, too, I’m used to having some time off in the winter to work on my game technically, so I like that.

Q: Are you the type who will sneak in a round, or even nine holes, despite some rough weather?

A: It depends on what kind of mood I’m in, but yes. I’ll golf in all types of weather. The cold doesn’t really faze me.

Q: What’s the coldest you’ve ever been while golfing?

A: It was pretty cold during the third round of NCAAs this year at Rich Harvest Farms (in Sugar Grove, Illinois)! Back in Calgary, we have an outdoor range with heated stalls and I’ve gone out to hit balls when it was minus-16 degrees Celsius (about 3 degrees).

Q: Is it safe to say that in Calgary, golf season starts later and ends earlier?

A: Yes! Except the biggest misconception that people have is that it’s a lot colder in Canada than here. That’s not necessarily the case everywhere. For Calgary in particular, the temperature is similar to Columbus but our golf season ends around mid-October and we start in late spring.

Q: How did you deal with that growing up, by playing more often or playing longer rounds?

A: With a shorter golf season, I had more time to work on my technique in the winter but I definitely lost some short game feel during those months too. In Calgary, we have a golf dome, where I spent a lot of my winter days hitting balls and essentially putting on cement covered in felt. I also had the opportunity to fly to Arizona, California and Texas to get in some rounds in, too, which helped.

Q: What kind of golf town is Calgary?

A: In general, British Columbia and Ontario probably have more juniors and have bigger golf towns than Alberta. However, Calgary has produced a good amount of elite amateurs. I know a ton of golfers from Calgary who have gone on to play at top-ranked D-I schools for golf. Aside from competitive golf, Calgary has a bunch of great courses around town and there are always a lot of people out in the summer!

Q: You’ve played three LPGA events in Canada; how satisfying were those experiences?

A: My first LPGA event was the CP Canadian Women’s Open last year in Calgary, which to this day is one of my favorite golf experiences. I made the cut, won the low amateur award and got to experience a phenomenal hometown crowd. It has been really special to play LPGA events and in my country because the fans are always so supportive and I love learning from the other professionals.

Q: Your sister is a collegiate golfer, too, correct? Are you guys competitive with each other when you play?

A: Yes! She played college golf in Canada but she is now in medical school at University of British Columbia and doesn’t play collegiately. She will still play for fun but we were definitely more competitive with each other when we were juniors.

Q: Has golf always been part of your family?

A: Not really. My dad got us into golf when we were young because he wanted our family to play as a natural foursome. But as it turns out, my parents don’t play golf ever since my sister and I picked it up and started playing it competitively!

A: I did gymnastics from ages 2 to 9, and then I also played soccer and did bit of track and field in junior high. I also skied a ton as a kid with my dad and sister!

Q: How did you end up at Ohio State?

A: A big part of my decision was based on the fact that Ohio State had just built the indoor golf facility and that coach (Therese) Hession was here. I felt like she was a coach who was dedicated to her players and could teach me a lot. I also wanted to go to a school that had a good balance of school and golf, and Ohio State fit that bill.

Q: How much will you use the indoor golf facility in the coming months?

A: We’ll use it a ton, along with our heated hitting bays on the driving range! The awesome indoor facilities are what helped me choose Ohio State over other schools.

Q: Is there anything you can’t do at the indoor range?

A: Honestly, no, and I’m not just saying that. You can putt, chip, hit balls, work out and even study. Our facility is amazing, and we are so lucky to have it. It makes the offseason a little more interesting than hitting balls in a golf dome.

Q: Are you a superstitious golfer?

A: I’m pretty superstitious, to the point where I can’t even name the things I do. I have little quirks and/or routines that I like to stick to — sometimes I don’t even know it’s a superstition until I break the routine.

Q: Let’s talk food. I’m guessing you don’t want to be too full on days when you’re playing. Do you have a go-to pre-round meal?

A: True, but we also have to be fueled for 36-hole days! While it varies, my pre-round meal usually consists of things like oatmeal, eggs, fruit, bacon, peanut butter, etc. Usually the staples that you can find at any hotel breakfast.

Q: And what is the best post-round meal to celebrate a good tournament?

A: I can always go for a nice steak! Or anything cooked by my dad.

Q: As a Canadian golfer, is it hard not to root for your countrywoman Brooke M. Henderson? Were you two competitors as juniors?

A: I have a ton of Canadian pride, as my teammates and friends here would also agree with. I got to play with Brooke a bit as a junior. She is a great person and competitor. It would definitely be hard to not root for her because she’s got such a great heart, too. I’m always cheering for my Canadians on tour! People like Alena Sharp, Jennifer Ha, Augusta James and Brittany Marchand (of the Symetra Tour) have been great role models and friends as well!

Q: Who is your favorite golfer?

A: Jordan Spieth. I think he brings a lot of excitement to the game and it seems like he’s got a big heart.

Q: And lastly: How did you celebrate the recent Canadian Thanksgiving? Do Canadians eat turkey every year, too?

A: Yes, turkey, and stuffing, pumpkin pie — all the good stuff! Our Thanksgivings are similar to American Thanksgivings, which people might not realize. This year, Gene and Sheila Smith held a Canadian Thanksgiving for all the Canadian student-athletes at Ohio State. It was a lot of fun and really sweet of them to bring a little bit of Canada to Columbus!