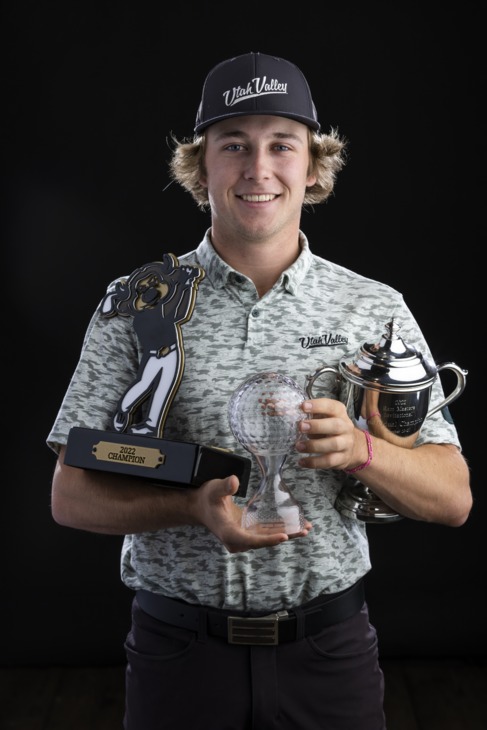 “So many people have said it’s too bad we’re on this long break,” McKinlay said. “I agree, I wish I could keep going and going and going until it didn’t work anymore but at the same time I’m really looking forward for the break, take some time, do some school work and give my body a rest.”

The break allows McKinlay to soak in all that’s happened with his golf game going back to June when he made it to the last stage of qualifying for the RBC Canadian Open on the PGA Tour, then was only 4 strokes behind leader Ethan Choi when the final round of The Alberta Open at Sundre Golf Club was cancelled due to heavy rain.

“I love Sundre, I think it’s a great golf course,” McKinlay beamed. “I felt like that last day I could put together a really good round and maybe chase down Ethan Choi, so not being able to play that day did give me something to prove going into the Men’s Amateur.” 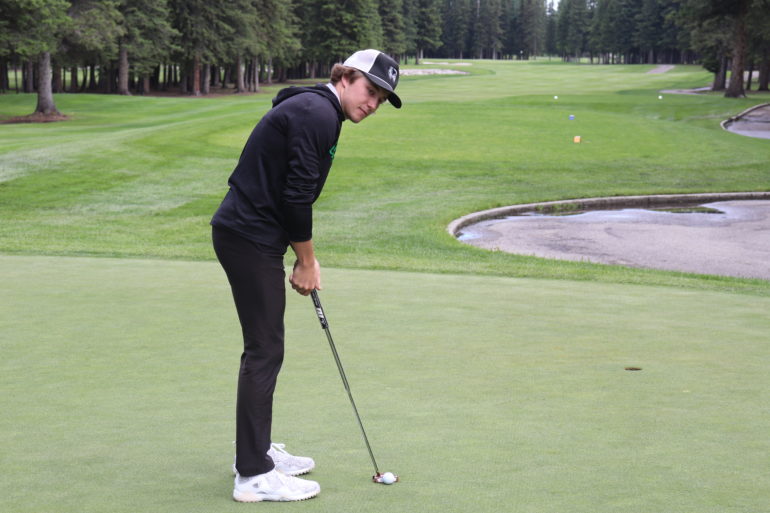 That’s exactly what the 21-year-old lefty did in late June at The Ranch Golf & Country Club west of Edmonton, winning the Alberta Mens Amateur Championship by 5 strokes.

“It felt like a long time since I’d won anything and the stuff I’d won before was in junior golf,” McKinlay admitted. “So getting that one was just huge for the confidence and just knowing I could win.” 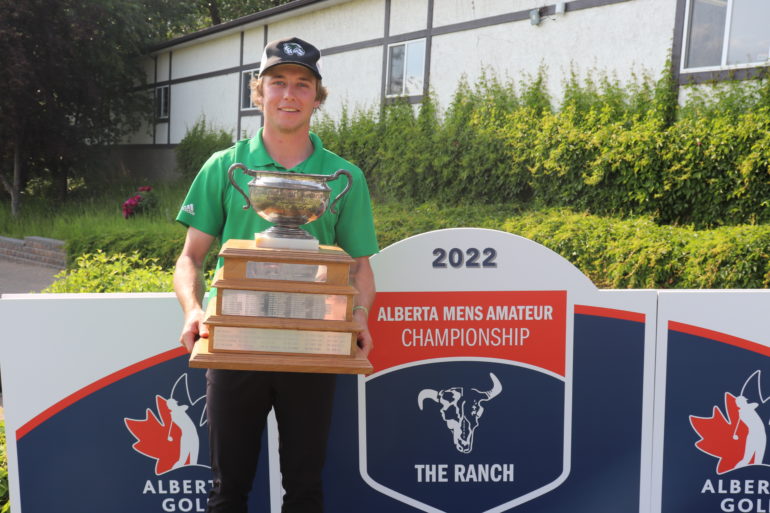 In June McKinlay learned he could win, this Fall playing at Utah Valley University he learned he could win in bunches, earning three straight tournament wins in what his University Coach Chris Curran called a historic run. It started in September at Colorado State, a Country Club style course with small greens and firm and fast fairways. McKinlay birdied the first hole then had 5 bogeys in the next 8 holes, he told himself to get it back to even par by the end of the 36-hole day. He ended up even better than that, 3-under-par for the day and that eventually propelled him to the victory. 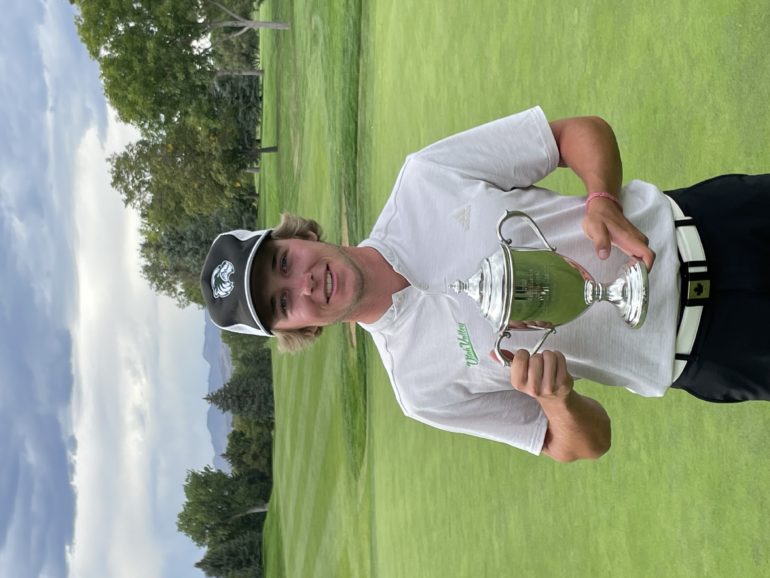 In early October he earned a narrow victory at the Mark Simpson Colorado Invitational shooting a 7-under-par total for the event. McKinlay headed to Wichita State on a tough course with an easier field looking for three wins in a row.

“Everyone was talking about the three-peat,” McKinlay admitted. “I kind of had that over my head but at the same time it made me more calm, I already had it in my mind where I saw myself winning three in a row. “

Winning three tournaments in a row is exactly what happened, and McKinlay couldn’t believe the amount of people who reached out to him in the U.S. and back home in Alberta.

“My coach said people don’t really do this, winning three in a row,” McKinlay said. “One of the coolest parts was hearing from people back home, messages, hearing from people I didn’t even think would reach out, friends and family from Lacombe that I didn’t think kept track of my career, it was really cool.” 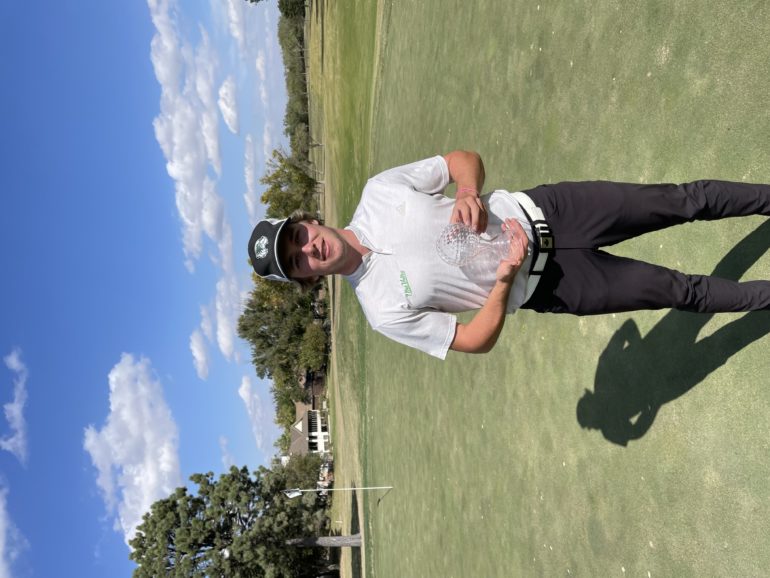 Utah Valley's @BradyMckinlay has done what no golfer in UVU history has ever done, and what few collegiate golfers have ever accomplished. He's won back-to-back-to-back titles and is in the middle of a historical season.#UVUgolf #BacktoBacktoBack https://t.co/4ol5ApkzmB

Now McKinlay has time to reflect as he waits for February and his last stretch of competitive golf with the Wolverines in Orem, Utah before graduating. The campus in Orem is situated just south of Salt Lake City and north of Provo, in fact Utah Valley University is a division one school only 10 minutes from BYU where another Canadian lefty, Masters Champion Mike Weir, played University golf in the late 80’s and early 90s. While McKinlay is focused on picking up where he left off in February, he’s also got his long term future on his mind. A tentative plan was to turn pro in the spring of 2024 but one of his recent wins gave him a spot in a 2023 Korn Ferry Tour event so it’s possible he defends his Alberta Mens Amateur Title next summer in Alberta and turns pro after that, these are all things he wants to discuss with friends and coaches.

There are a lot of factors that go into the decision of when to turn pro and where to live, McKinlay’s girlfriend Caylyn Ponich is from Utah and competes on the Utah Valley Women’s Golf Team, she even caddied for Brady at The Ranch during his Alberta Mens Amateur win.

WATCH: BRADY MCKINLAY HAS CAYLYN PONICH CADDY FOR HIM AT THE RANCH

No doubt McKinlay will be leaning on the advice of Ponich, his family and friends, University coach Chris Curran, his teammates including fellow Albertan Kai Iguchi and his Alberta Coach Scott Stiles as well as he makes his future decisions. Stiles and McKinlay have been working together for 4 years and Brady says putting used to be the weakest part of his game but after working with Stiles, the 2022 PGA of Alberta Teacher of the Year, putting is now the best part of his game.

“Absolutely no surprise to me Scott won that award,” McKinlay said. “It is unbelievable what has changed in my game since I’ve been working with him, he’s obviously a putting guru and knows that part of the game better than anybody I think.” 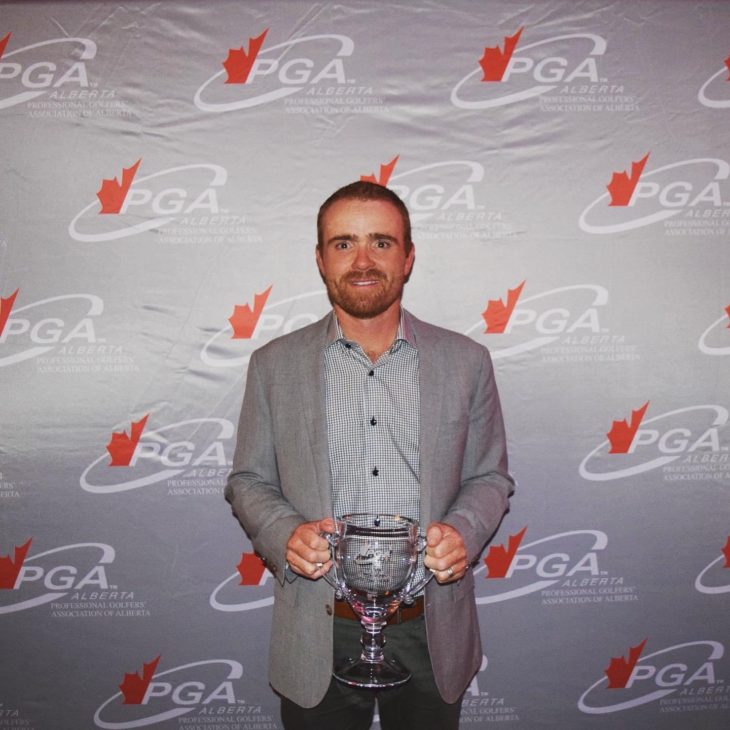 McKinlay first got a glimpse of his coach when he was younger watching his uncle Tom McKinlay Jr. compete against Stiles in Alberta Golf events (If you think Brady’s three wins in a row are impressive, his uncle won the club championship at The Lacombe Golf & Country Club 18 times including 14 in a row). The Lacombe Junior Open on The McLennan Ross Alberta Junior Tour is where Brady McKinlay first tried competitive golf at the age of 13. Brady grew up with his father Perry heavily into hockey but his grandfather Tom McKinlay Sr and his son Tom McKinlay Jr. heavily into golf, so Brady played both growing up and only focused on golf full time at the age of 16.

After McKinlay’s breakthrough 2022 season and thinking about his long term future he’s been asking himself why can’t someone from Alberta eventually make it on The PGA Tour?

“I know Ontario and BC are way more densely populated, at the same time Alberta has some great talent at the top end,” McKinlay said. “There’s some great talent in the class around me, from Max Sekulic, Carter Graf, Ethan Choi, Hunter Thomson and all these guys I’ve grown up playing against. They have skill and talent and I wouldn’t be surprised if somebody did make it but at the same time the PGA Tour is an extremely tough place to get to, but ya that would be the coolest thing to have someone from Alberta represented on Tour.”

But first things first, McKinlay patiently waits until February to see if he can produce a four-peat and keep the amazing streak going, the “Brady Bunch” from Lacombe will certainly be watching. 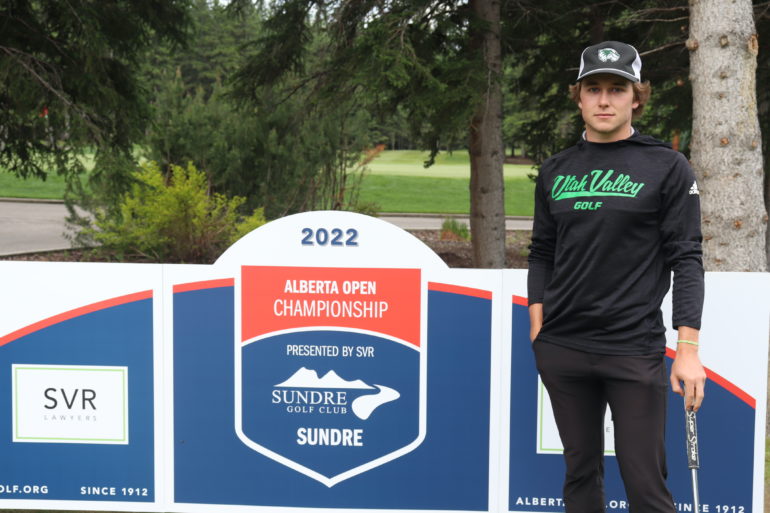