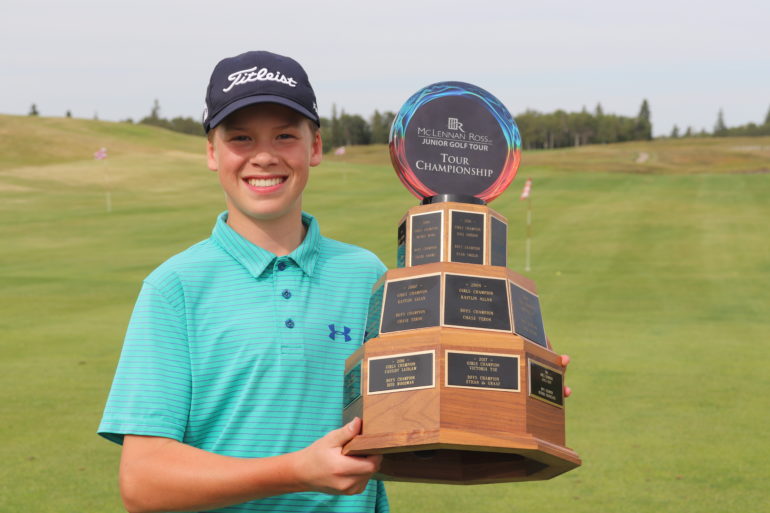 Golf, like any sport, can be either mundanely predictable or wildly random, with some degree of both in almost every tournament.

Wolf Creek Golf Resort near Ponoka was once again the site of the annual McLennan Ross Alberta Junior Tour presented by Crowe MacKay season-ending Tour Championship as 125 of Alberta’s best juniors from across the province descended on Ryan Vold’s beautifully groomed and eminently challenging layout an hour south of Edmonton. Skies were mostly sunny but there was just enough wind to give the Wolf some bite, combined with as one youngster put it, “some really greasy pin placements.” 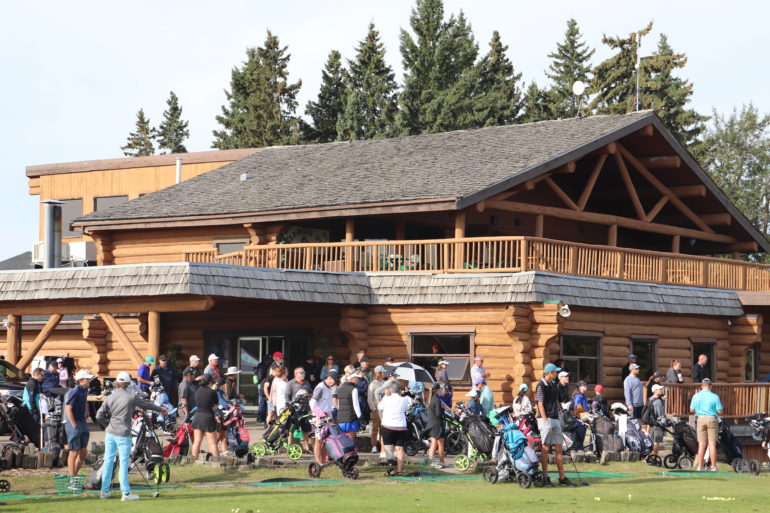 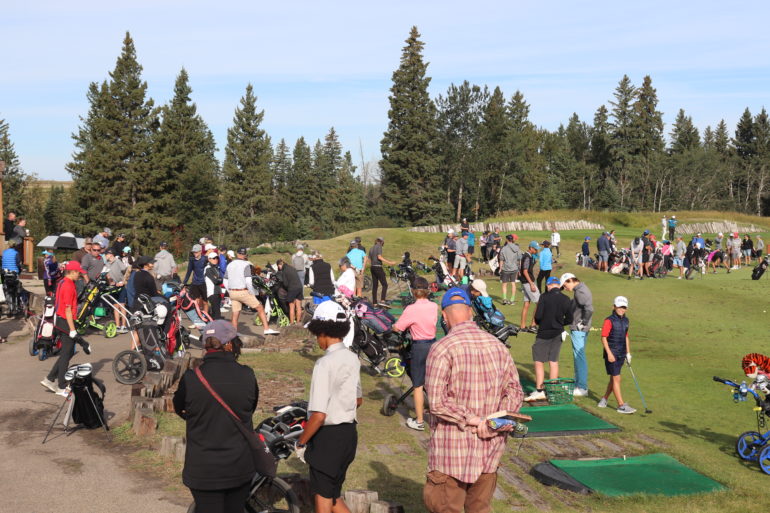 The pre-tournament favorite in the junior girls’ division had to be Camrose’s Jayla Kucy, the three-time defending Tour Champion, and the ‘mundanely predictable’ held form this afternoon, as Kucy four-peated with a 4-over par 74.  But the Camrose junior needed every one of her four birdies, as Brynne Davies of Earl Grey was hot on her heels with a 75.  Paired together in one of the feature groups, Davies and Kucy more or less went about their business on the course, as Kucy admitted, “I didn’t even know where I stood with Brynne” during the round.  “I was just playing golf.” 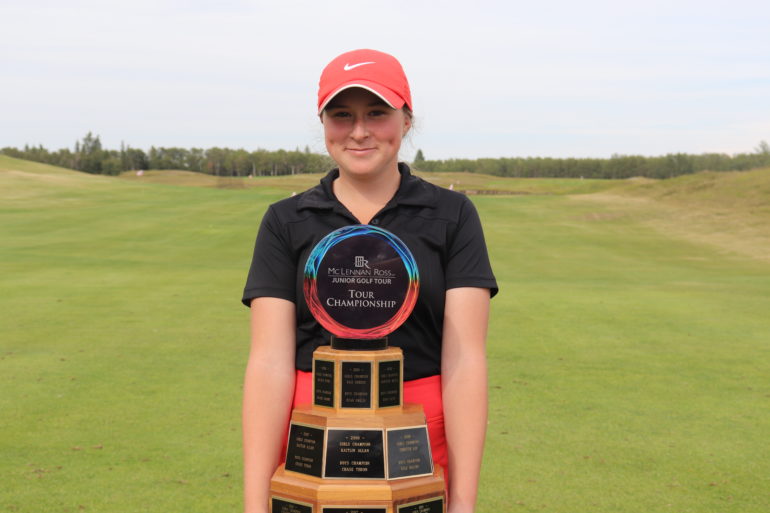 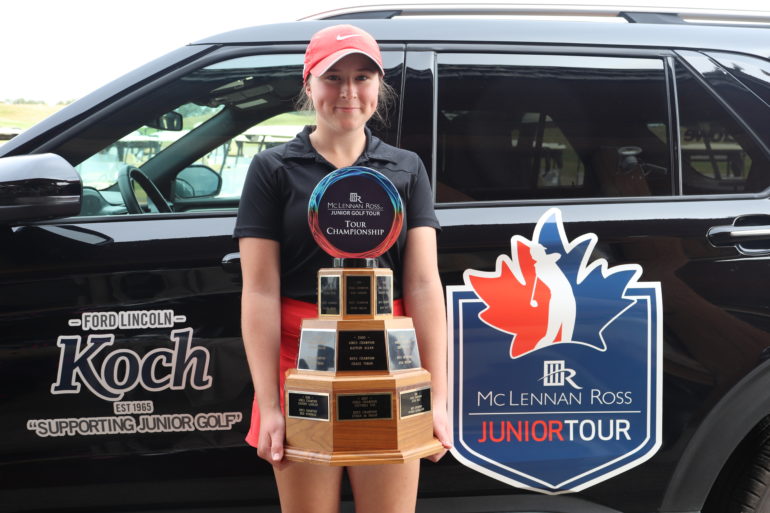 Kalee Seto of the Royal Mayfair, who captured the Alberta Golf U17 Championship last week at rain-soaked Alberta Springs Golf Resort in Red Deer, completed the podium with an 80.  What was very encouraging to see was that we had what we believe to be an all-time Tour Championship record total of 34 junior girls on hand to compete today.  Over half of these girls were aged 14 and under, which certainly bodes well for the future of girls junior golf in Alberta. These youngsters will thrive with more and better tournament competition and once they gain some additional experience, the sky’s the limit.  They’re coming for you, Jayla!

The junior boys’ division didn’t have that one overwhelming pre-tournament favorite, as any of a dozen or more junior boys would not have been classified as an upset had any of them won.  I have to admit I might not have had 14-year-old Christian Flick of Carnmoney GCC in Calgary included on that list, but that’s what makes athletics so much fun, the unpredictability of competition.  Flick perhaps doesn’t yet have the resume of some of his contemporaries on the junior golf scene in the province, but this kid can roll his rock.  He backed up a confidence-building 68 in his practice round on Sunday with another 2-under par 68 this afternoon when the guns had real bullets.  Six birdies, one double, a couple of bogies and his first major junior win! Voila! 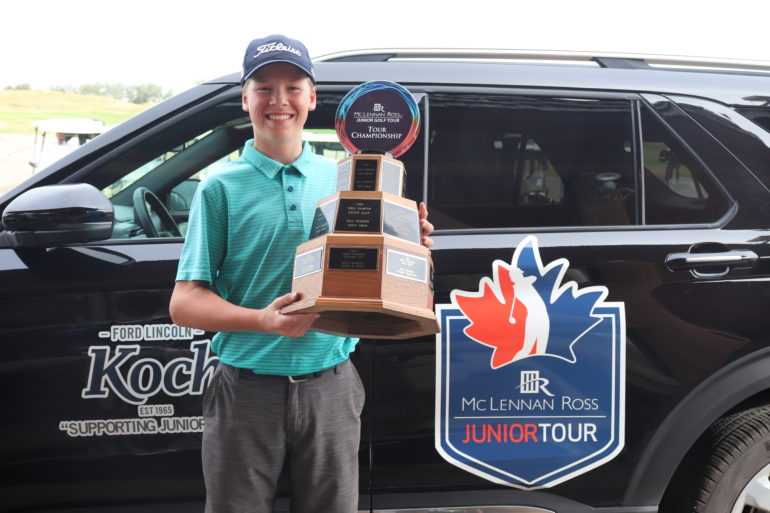 FULL SCORES IN ALL DIVISIONS HERE

One player who WAS on the favorites list was another 14-year-old Calgarian, Tyler Kidd of Priddis Greens GCC.  Kidd, who won the Alberta Golf U15 Championship last week at Alberta Springs,  had one of the best rounds on the Tour this summer, an 8-birdie 69 at the very difficult Trestle Creek Golf Resort early in July. Kidd probably wished he had saved one of two of those birdies for today as his 1-under par 69 fell one shot short of forcing a sudden-death playoff. Josiah Tong of Heritage Pointe finished solo third with a 1-over 71.

WATCH: 1 ON 1 INTERVIEWS WITH JAYLA KUCY AND CHRISTIAN FLICK

Today’s Tour Championship brings down the curtain on the 27th season of the McLennan Ross Alberta Junior Tour.  Thanks so much to Ryan Vold for generously providing his spectacular golf course as a venue.  Thanks to our roster of Corporate Partners, whose financial support makes the Tour possible.  Thanks to the host sites around the province, for their vision in making their courses available to help not only grow the game, but to help grow good young people learning all the life skills that golf provides.  Thanks to the parents and families who support their children in their athletic endeavors and their passion for junior golf.  But most of all, I want to thank the players themselves.  I’ve said this many times over the years, but you can have all the sponsors and all the golf courses and all the infrastructure you want, but if you don’t have players, you don’t have anything.  These kids are willing to endure a lot of frustration and disappointment at times, because the payoff is the fun and the making of friends and the sense of accomplishment from the game that makes it all worthwhile for everyone. 6 Provincial Champions crowned at U17, U15 and U13 Championships