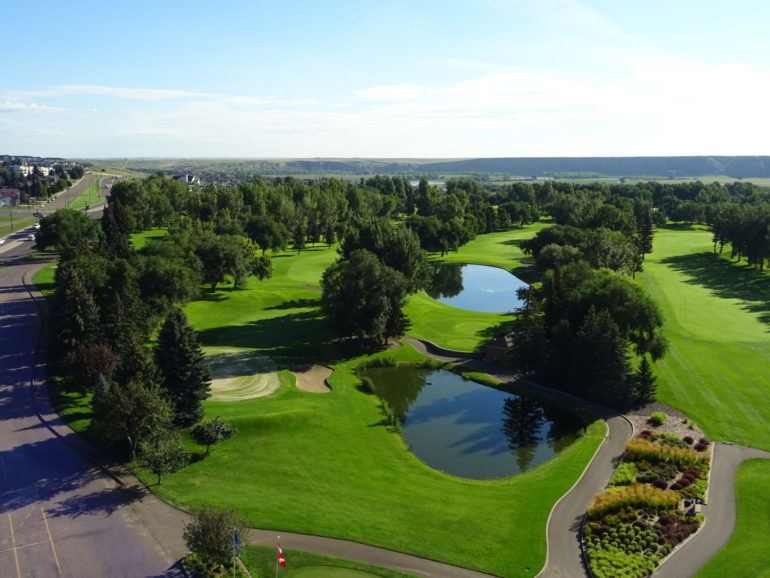 Don’t get fooled. The Medicine Hat Golf and Country Club, which will host this year’s Alberta Mens Amateur July 21-23, ‘only’ plays 6,700 yards from the tips. But the stately, pristine, tree-lined course can get the better of you in the blink of an eye.

“It’s not that long but it’s not that easy either,” said general manager Cam Jacques. “It’s a fair test and when the wind blows, like it can here, the greens get firm and it can be more about positioning and picking your spots. You’ve got to think your way around this course. The landing areas on most holes are only about 25 yards wide. And when we let the rough grow up high and nasty, well, you definitely can’t just pull out your driver and let it fly.”

“There are a lot of trees that come into play – more than at any other course I usually play,” said Darrell Hodges, the club’s President. “It doesn’t favour one particular shot. It doesn’t set up for a fade or a draw. You have to be able to hit both shots. You’ll need to be able to hit every club in your bag and every shot in your arsenal. It’s tough and it’s beautiful. I love this place.”

The Medicine Hat Golf and Country Club’s refusal to wince under pressure from the best players in Canada is well documented.

When the course hosted the Alberta Mens Amateur in 2012 Riley Fleming, known for going very low, won with a score of just 1-under 283 for the four days – two rounds of which were played in very blustery conditions. When some of the top Canadian kids came to Medicine Hat in 2018 for the Canadian Junior Boys, Quebec’s Christopher Vandette won with a 2-under score.

But it can be had too. The tournament record of 65 was set by Kelly Risling in 2016. Vandette equalled that score in the Canadian Junior Boys.

“If it’s nice and the wind doesn’t blow, I expect somebody to get to minus-8,” said the course’s head pro Wayne Mattson, who is entering his 22nd year at the Medicine Hat Country Club. “If it’s windy then even par will be a great score.” “We’re a little like the courses they play on for the British Open,” concurred Jacques. If the wind doesn’t blow then the players can eat it up. But when it blows the course shows its true character.”

Originally founded in 1913 just outside the city, the course relocated to its present site in 1934 in the heart of the city. “Along with the Calgary Golf and Country Club, the Edmonton Country Club, Lethbridge and Fort McLeod, it’s one of the oldest courses in the province,” said Mattson.

Perched high above the South Saskatchewan River, Mattson said the course has it’s own Amen Corner – holes 13, 14 and 15.

“No. 15, a slight dog-leg left which plays uphill is the most difficult hole on the horse in my opinion,” said Mattson. “It plays 460 yards and you need to hit a big drive down the right side of the fairway or you will be blocked out by the giant poplars on the left side. The green is very difficult with a slope that runs half way up to the green. Par is exceptional. “A lot of matches are decided on those three holes.” Hodges agreed. “No. 13 is pretty tight; No. 14 has a long green and there can be some tricky pin placements and as for No. 15 if I come away with a bogey I’m tickled pink,” Hodges said. “I play that hole as a Par 5.”

An argument can easily be made that No. 17 will be the hardest on the course for the Amateur. Playing as a Par 5 during regular play, No. 17 – which is 487 yards long – played as a Par 4 during the Canadian Junior and it is expected it will also play that way for this summer’s Alberta Mens Amateur, “We like to try and make it as challenging as possible during big tournaments,” said Hodges.

But it’s the overall impression that is most important to its management and members. “Our grounds superintendent, Mark Begin, does a great job on the greens and fairways. They’re always in what I like to say is fabulous shape. It’s something we take great pride in. “The other thing about our course that is outstanding is the service and the staff in the clubhouse,” said Hodges.  “We’re very friendly; we get a lot of compliments.”

Two greens on holes 9 and 10 were recently changed. “We redid the green complexes on those two holes two years ago,” said Mattson. “While the greens are much bigger, now it’s much more difficult to hit those two greens because of different bunkering and false fronts on both of those greens. And there is a lot more slope.” Continuing to always improve the course, five years ago the grass on the greens were changed to T-5 bent. “There used to be a lot of poa – up to 70 per cent – and it was often a struggle to get through the winters,” said Jacques. “The new grass is great. It allows us to keep the speeds of the greens up and not have to worry about disease.”

As well as the 2012 Alberta Mens Amateur and the 2018 Canadian Junior Boys, the Medicine Hat Country Club also hosted the 2016 CN Future Links Junior and the 2004 Alberta Ladies Amateur. “We like to show off our course,” said Jacques. “I’d like to see us host the Canadian Womens Amateur in the next three or four years. We’ve talked to Golf Canada and put our name in for it. “We like hosting big events; our members like it,” said Jacques. “We’re very excited to show off our course again this year.”