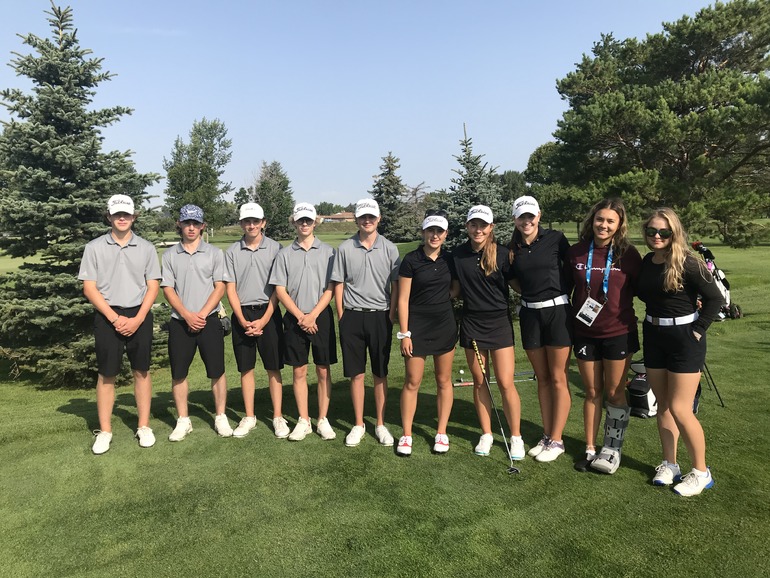 Golf is very much an individual sport – you against the rest of the field, against yourself or even just trying to have the low score in your regular Sunday morning foursome. But major events like the Western Canada Summer Games which takes place Aug. 9 – 18 in Swift Current, Saskatchewan, bring out a very valuable team component.

“You want the individual gold medal but you also really want the team gold too; you really want your teammates to do well,” Choi said. “In a regular tournament you finish your round, practise a bit and then have time for yourself. At the Summer Games it had that social aspect which was different, unique and cool. We did a lot of team stuff.

“We all hung out with the best athletes in their sports in the country. Team Alberta had a games room, we lived together, ate together and travelled together,” said Pincher Creek’s Choi, who finished tied for fourth in the individual component but had to settle for a fourth-place finish in the team segment losing the bronze medal in a playoff to Manitoba.

“Our golf team also all went to watch and cheer on our teammates competing in different sports. We went to the boy “It was just really cool to be a part of it. It was one of the highlights of my life. I was very glad to have been a part of it,” said Choi, who won the PGA of Alberta Junior Masters last year.

Those athletes competing in the Western Canada Summer Games – Alberta will have 435 full-time athletes, coaches and administrative staff in 16 different sports – will almost certainly feel the same way.

“For sure – especially in sports like golf where you usually don’t get much team bonding. said Jerry George, Chef de Mission for Team Alberta. “For many of the competing athletes it will be a once-in-a-lifetime experience; for many it may be the only time they get to experience something like wearing their team colours, walking into the opening ceremonies and for the medal presentations.

“Being part of a team environment brings out different energies, nerves and potentially stepping up their games at the highest level against peers you participate against. It adds so much to an athlete’s repertoire because it’s more than just representing themselves. It’s a conglomerate of athletes. Wearing the same uniform builds bigger team mentality.

“In a regular golf competition the players usually individually stay in hotels or have their parents drive them to the course. Here they stay in a dorm, ride the buses together and get the unique experience for a well-rounded athlete,” said George, who has been involved with Alberta Sport Connection – the Alberta government’s funding and support corporation which is part of the Ministry of Alberta Culture and Tourism – for 18 years.

“They also get information on proper nutrition, mental training and sports psychology that they are unlikely to get in any other competition.”

Held every four years, the Western Canada Summer Games are open to athletes ages 13 – 20 years old and are a precursor to other national, international and Olympic competitions. Contested over 10 days, this year’s Games will see over 1,700 athletes, coaches, officials and mission staff from Alberta, Saskatchewan, Manitoba, Northwest Territories, Yukon and Nunavut attending the 10 days of competition. This is the first year British Columbia will not be part of the Games.

“Their government made a decision that it wasn’t a financial priority,” said George. “It’s disappointing for sure. In the big picture B.C. was always Alberta’s No. 1 competition. It will change the medal playing field when you are missing a strong competitor like B.C. always was.”

Alberta, on the other hand, will again send a full team in all 16 sports.

Based on a ranking system Alberta Golf will determine the five boys and five girls – along with a coach and manager – who will represent Alberta in golf. “The selection process will be merit based and is a combination of the 2018 Golf Canada Order of Merit and the 2019 Golf Canada Order of Merit points total as of June 17, 2019 which is the completion of the Future Links Prairie event,” said Alberta Golf’s Jennifer Davison.

George is excited about going to Swift Current. “They are going to do a really good job. It’s a small enough community that everybody in the city will know the Games are going on,” he said. “Anytime we can go to a competition in a relatively small community adds to the energy of the Games. You can get lost in a bigger community.

“In Swift Current, the minute you get there you will see signage; everybody will know something big is happening. In smaller communities everybody has to get involved to pull them off and the venues are all close together so athletes will go to sports they aren’t participating in to cheer their teammates on.”

Here is Team Alberta that will will compete at the 2019 Western Canada Summer Games starting August 16th in Swift Current, Saskatchewan. Register for the final Recreational event of 2019, Alberta Net Am Championship.